Interaction term negative when both its components are positive

I am running a negative binomial regression to obtain an interaction term for two variables. Both of the variables independently significantly increase the outcome variable, however according to this output below, they interact to significantly reduce the outcome variables score. I have attached the output below, dum2 is an IV, along with emotdys5. The outcome is sdq_conduct2, while the interaction term is something like dumXemotdys5.

My question is how is it possible for two variables to independently increase the score of the outcome variable, but together significantly reduce it? Thanks for any help. 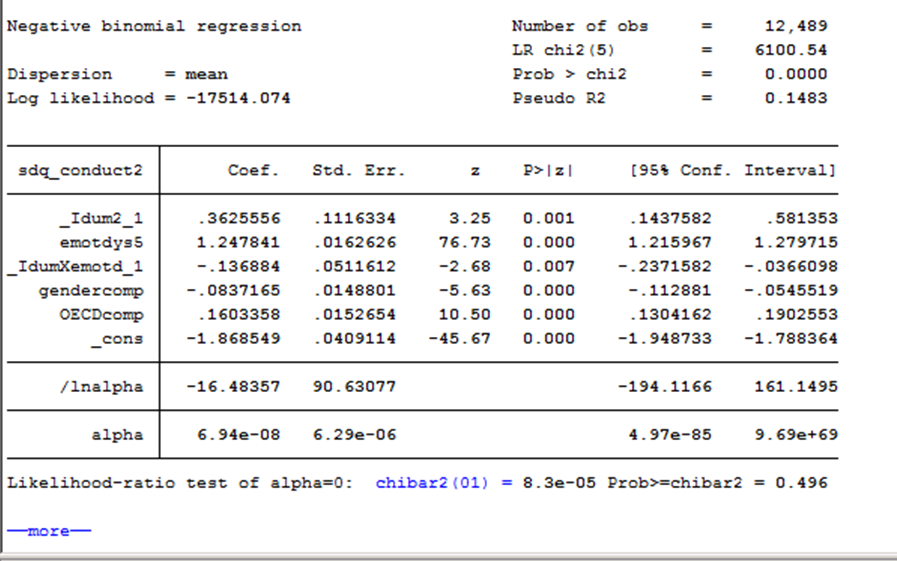 When the value of one variable increases by one unit, the slope of the relationship between the other variable and the outcome increases by the estimated interaction term (or in this case decreases, because you have a negative interaction). So when emotdys5 is equal to one, the slope of the relationship between _Idum2_1 and the outcome is 0.36 - 0.14 = 0.22.

Basically, the correct interpretation is that the positive relationships between the two IVs and the outcome are smaller/weaker when the values of the other one is high - not that they 'together significantly reduce it'.

As an aside - make sure you choose meaningful zero values for your variables, since if your zero values aren't meaningful, it will be substantially harder to interpret your results.

Not the answer you're looking for? Browse other questions tagged regression binomial interaction or ask your own question.