Background: I am trying to show an increase in a number of variables over time, so initially I ran a simple linear regression. However, I subsetted the data so that I could get a regression estimate for each species and reef combination (which would indicate the change per year).

Below I show the output for Density one of the response variables, where Little Grecian, etc = Reef and O. annularis, etc = Species. There are 3 significant and 2 marginally significant ReefSpecies with time. The second column is the estimate, the third column is the F-value, and the last column is the p-value.

Of course, I was happy with the output but I also wanted to make a linear model to see what was accounting for this increase/decrease/no change in my response variables.

The linear model looks something like this: lm(Density ~ Species + I(Chl_zoox^0.25) + Season + TN + Biomass + Turbidity + FvFm + Time, data=Seasonal) and the output indicates that time is nonsignificant. 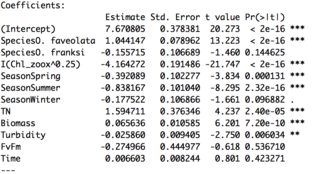 Last, I was told that if I ran a regression with the a 3-way interaction of Reef*Species*Time (e.g. lm(Density ~ I(Chl_zoox^0.25) + Season + TN + Biomass + Turbidity + FvFm + Species*Reef*Time, data=Seasonal)) that I would get theoretically get the same estimates as the simple linear regression (lm(Density ~ Time, data=data, subset=ReefSpecies=="ReefSpecies1)). Clearly, this is not the case, and I receive NA for some of the output. 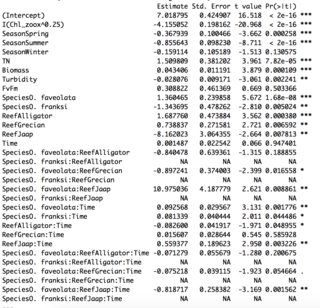 From my understanding, the multiple regression has more power and therefore should still be significant.

How can I interpret this interaction to get similar values? And why wouldn't they be significant?

3. What is the deal with NA in the interaction output? Does this have to do with multicollinearity?

First, multiple regression does not necessarily have more power, particularly when there are so many interaction terms as you have specified. Each extra variable, each extra factor level, and each extra interaction uses up degrees of freedom, so you might decrease your ability to detect a true difference if the extra variables/factor levels/interactions are unrelated to your outcome variable.

Second, your desire to match the results of simple regression to a combination of coefficients in multiple regression suffers from the same type of problem you had in your desire to compare intercepts against group means in a previous analysis attempt. If you don't have a perfectly balanced design with the same number of cases in each group then there is no assurance that you can match the values this way.

Third, your initial data summary shows that there are no O.franksi in any reef environments except for Alligator. So there is no way to obtain coefficients that include interactions of O.franksi with Reef; you have no data on 3 of the 4 Reef environments. Hence the NA values.

You seem to have done a lot of work to collect these data. Given the nature of these data, you are probably at some type of academic institution where there would almost certainly be local statistical expertise. As much fun as it is for me to answer questions on this site, it might be better for you to identify and start working with someone nearby who can go over the details of your data at close hand and help you analyze them in the best way to get at the scientific questions you are asking.

Not the answer you're looking for? Browse other questions tagged regression statistical-significance interaction or ask your own question.

0
Why are the standard errors of these two outputs so different?
1
Regression coefficient overestimated in full model