I've downloaded a script to draw a correlation matrix using colored circles. This script allows to order variables using PCA, but I'm not sure how it works. The code responsible for ordering is below:

Question: What is the interpretation of such ordering and what theory lies behind it?

It is described in Michael Friendly's American Statistician paper on corrgrams, Preprint PDF here. See section on correlation ordering. Also if you look at the source of the corrgram library you will see some other potential ways to order the data as well.

To describe what the code is doing in a nut-shell, the variables in the correlation matrix are ordered according to the correlations with the first and the second principle components extracted from that same correlation matrix. If you look at the Eigenvector plot in the Friendly paper (Figure 3), the code atan(e2/e1) is the angle between the ray associated with a particular variable and the horizontal axis. The variables are sorted by this angle, in a counter-clockwise order. If the whole picture were squeezed horizontally by the square root of the first eigenvalue, and vertically by the square root of the second eigenvalue (this would not change the order!), then the $x$ and $y$ coordinates of each ray's endpoint would be exactly the correlations of this variable with PC1 and with PC2. 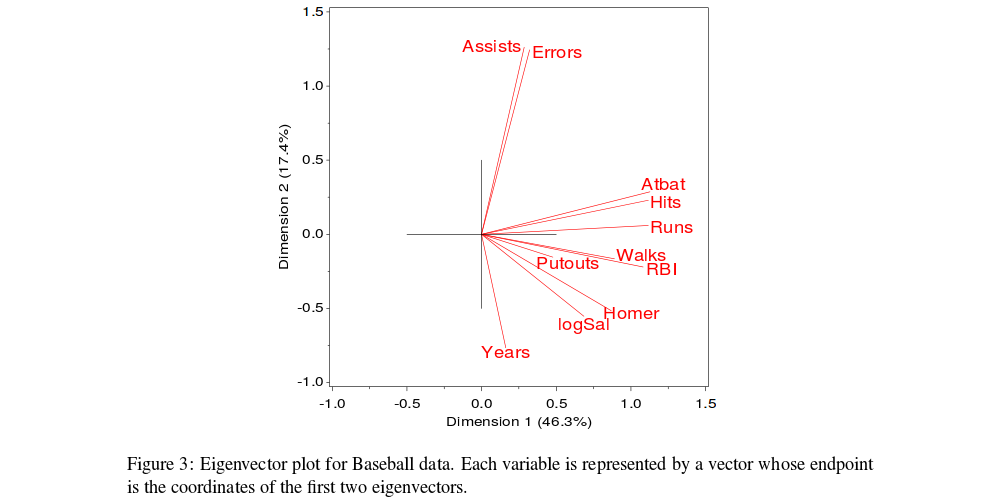 Also note I assume the first if statement in the code prevents this ordering from occurring if the correlation matrix is not full rank.

Not the answer you're looking for? Browse other questions tagged r pca biplot or ask your own question.

1
What is this “PCA-based re-ordering” for a correlation heatmap / correlogram?
4
Row Correlation Heatmap Pandas

32
Visualizing a million, PCA edition
1
Mathematics behind how the normal to the plane is derived from a linear model when plotting with planes3d
2
PCA scores in a for portfolio replication task: stumble over mean-centering question
13
How to perform cross-validation for PCA to determine the number of principal components?
5
Principal component analysis on time series : meaning?
0
PCA biplot vs separate score+loading plots