Are there mathematical reasons for convolution in neural networks beyond expediency?

In convolutional neural networks (CNN) the matrix of weights at each step gets its rows and columns flipped to obtain the kernel matrix, before proceeding with the convolution. This is explained on a series of videos by Hugo Larochelle here:

Computing the hidden maps would correspond to doing a discrete convolution with a channel from the previous layer, using a kernel matrix [...], and that kernel is computed from the hidden weights matrix $W_{ij}$, where we flip the rows and the columns. 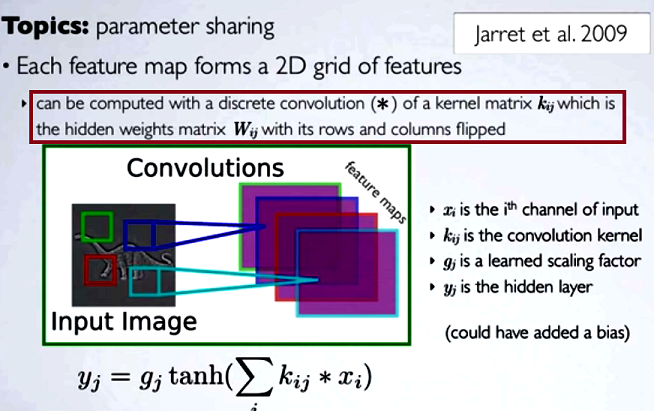 If we were to compare the reduced steps of a convolution to regular matrix multiplication as in other types of NN, expediency would be a clear explanation. However, this might not be the most pertinent comparison...

In digital imaging processing the application of convolution of a filter to an image (this is a great youtube video for a practical intuition) seems related to:

In this particular technical environment of DSP correlation is defined as:

which is essentially the sum of all the cells in a Hadamard product: 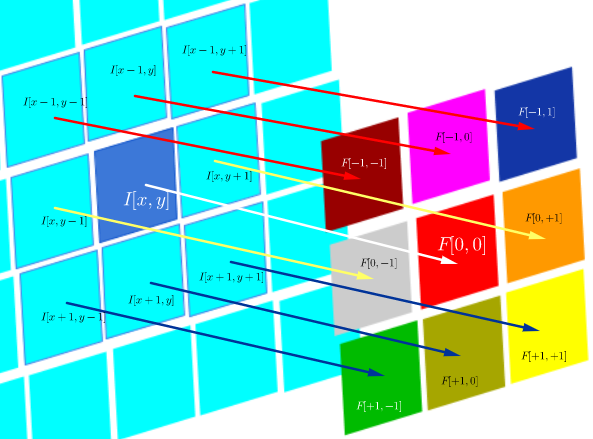 On the other hand, convolution is defined as:

which as long as the filter is symmetric, it is the same as a correlation operation with the rows and columns of the filter flipped: 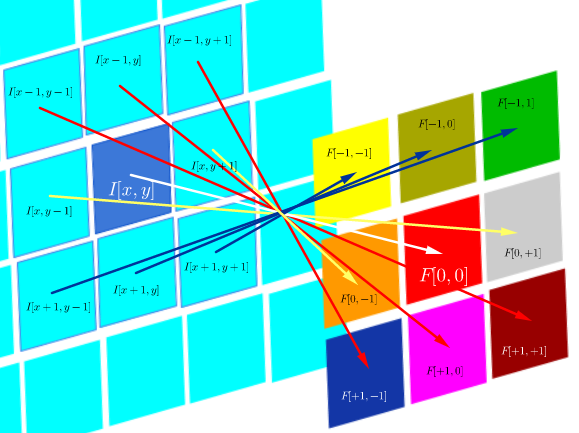 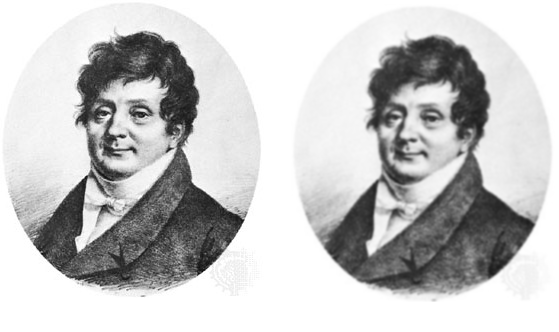 Computationally, both operations are a Frobenius inner product, amounting to calculating the trace of a matrix multiplication.

From what I gather so far the answer is no. FFTs have been used to speed up GPU implementations of convolutions. However, FFT are not usually part of the structure or activation functions in CNNs, despite the use of convolutions in the pre-activation steps.

Yes, they are equivalent.

Neither the associativity of convolution (useful in math proofs), nor any considerations regarding FTs and the convolution theorem are applicable. In fact, it seems as though the flipping doesn't even take place (cross-correlation being simply mislabeled as convolution) (?).

To find more details about the reasons that people sometimes find it more intuitive to think about convolution than correlation, this post may be useful.

There remains this question that if there is no difference between convolution and cross-correlation, what is the point of flipping the weights into the kernel matrix? I would like to include some sentences from the Deep learning book by Ian Goodfellow et al. to answer this question:

The takeaway is that although convolution is a favorite operation in classic machine vision applications, it is replaced by correlation in many of the implementations of the convolutional neural networks.

There's a practical reason for the link between FFTs and convolution.

Convolution is slow in the time/image domain. Applying an $n \times n$ filter to one pixel requires $O(n^2)$ multiplications and additions. Applying it to every pixel in an $N \times N$ image thus requires $n^2N^2$ operations. This grows quickly, and the large number of operations not only requires extra time, but also introduces more numerical error.

The Convolution Theorem says that convolution in the time domain is equivalent to pointwise multiplication in the frequency domain. FFTs are fast: they have good asymptotic performance $O(N^2 \log N^2)$ and the actual implementations are often highly optimized. Switching to the Fourier domain thus lets you perform a convolution in $O(N^2)$ time (which is dominated by the pointwise multiplication), instead of $O(n^2N^2)$. This can provide a considerable speedup, even though it seems much more complicated to go down the FFT -> multiplication -> inverse FFT route. More here

17
What does the convolution step in a Convolutional Neural Network do?

2
Why do auto-encoders with 1 hidden layer usually use the output weights/filter as $W=W^T$?
27
How to initialize the elements of the filter matrix?
8
What are the steps to convert weighted sum of squares to matrix form?
1
What does the matrix $M = [diag(m_{:,1}),\ldots,diag(m_{:,m})]$ look like?
0
Making sense of indices in 2D convolution operations in convolutional neural networks