The article plots for every 100 women that use a certain type of contraception method the number of unplanned pregnancies over time.

In particular at the end of the article they say:

The numbers are calculated as follows:

This is true if probability pregnant in a year is independent of the year before, but seems highly unlikely to be true. If you use contraception the wrong way, it will probably go wrong in the first year, and if it does not, then it probably won't go wrong the year after?

Chances of getting pregnant without IVF (in vitro fertilization)

The rate of pregnancy is also a function of frequency of intercourse, which also changes with age: 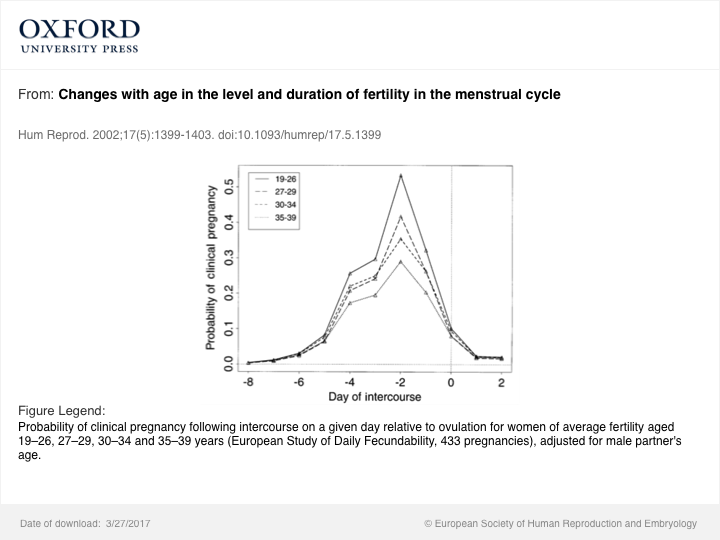 Finally, to consider the effectiveness of contraception on an annualized basis, one must consider not only decreasing fertility and variable but generally somewhat decreasing sexual frequency with age, but likely also myriad other factors. For example, the percentage of women who are postpartum increases with age, and postpartal women may have a different contraceptive usage effectiveness than the nulliparous, age of the partner at time of intercourse relative to ovulation, see image: 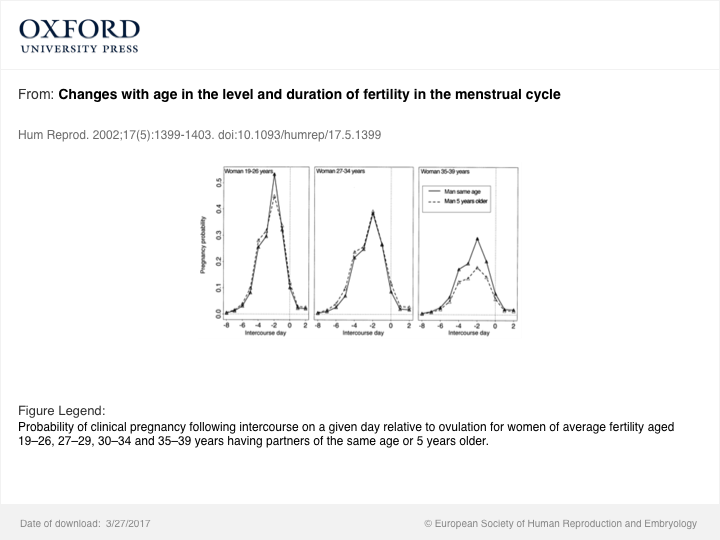 timing of intercourse relative to ovulation, having a huge impact on fertility, also reflects on the likelihood of pregnancy even when other factors, like contraception is considered. Thus, a woman who relies on the rhythm method, as well as one or more other methods of contraception, i.e., a woman who both knows her body functions, and uses that knowledge (and as knowledge is acquired) may eventually do an increasingly effective job of avoiding pregnancy, such that there is essentially no chance for independence of fertility with elapsed age.

Here is an account of the probabilities relevant to the problem at hand.

Therefore, in average, generally stricly less than $(1-p^{10})\times 100$ woman in a hundred will have an unwanted pregnancy over a period of 10 years.

Not the answer you're looking for? Browse other questions tagged regression independence statistics-in-media or ask your own question.

1
Assume (x,y) are drawn from independent & identical distribution when y=f(x)
0
Why can a process with independent increments never be a stationary process?
8
Using segmented linear regression as evidence for the limit of human lifespan
0
Simple probability problem with multiple unbalanced coins
5
Bootstrap yielding counterintuitive results (Update: but not anymore)
3
Minimizing expected brier score and Brier score interpretation
0
Do randomization tests for difference in means assume independent groups?
12
Are independent variables necessarily “independent” and how does this relate to what's being predicted?