I've been asked to solve a problem for a project. I'm working on Python or R. I need to approximate a function with multiplayer perceptron (neural network).

After reading a lot about perceptron and neural network for the approximation of functions, I found a code that helped me a lot and my program is based on this code. Here is the code (with comments) I use to approximate my function followed by questions and examples :

2) How to fix the number of neurons to use ? I just try with a lot of different numbers but I don’t have rule.

3) How to fix the number of iteration the neural network use (maxit=40 here) ? Should I use other parameters of nnet ? I'm a bit lost

4) I have 1 hidden layer as I see that most of approximate function case use only one but I dont really know why.

6) When I run my code, results are changing, sometimes the approximation is quite precise and sometimes It’s just not good from a certain points of the curve and I dont really know why.

Example 1 : a good approximation (not bad) 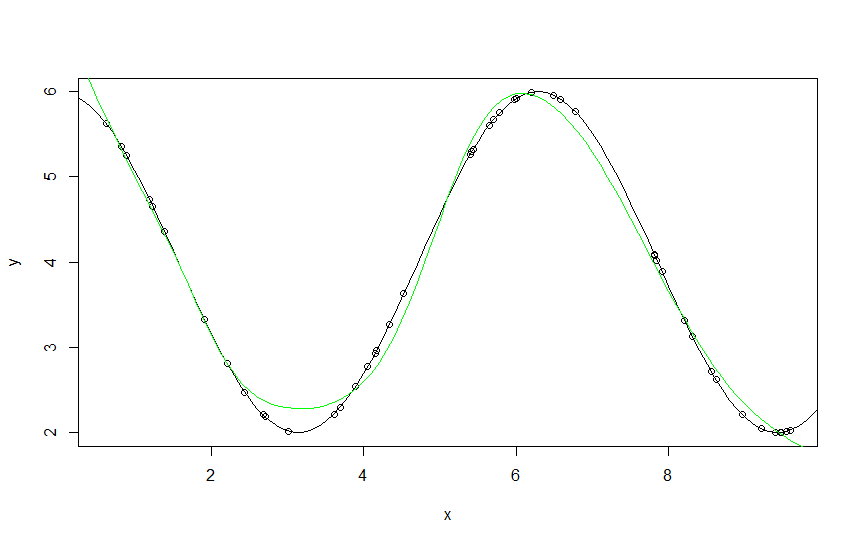 Example 2 : a bad approximation (with the same code) 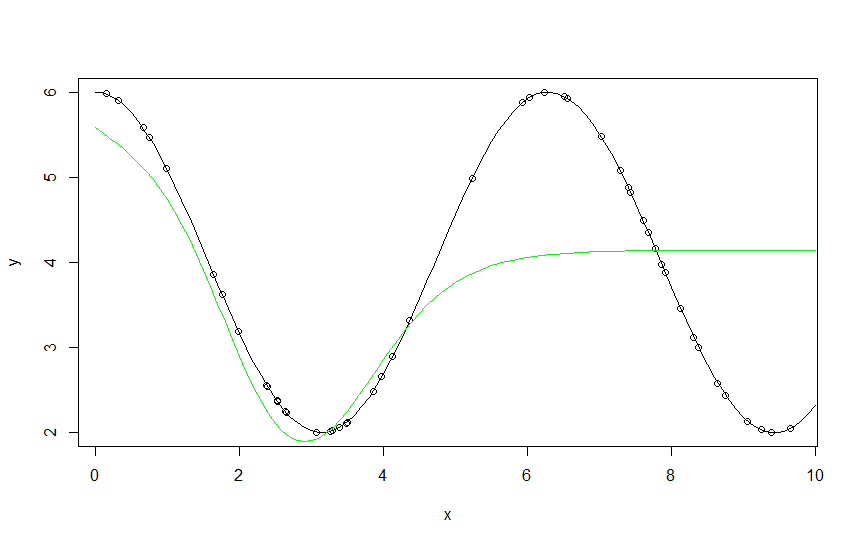 First timer here. I feel a little jumpy about it. Let's go:

Network hyperparameter(number of neurons, learning rate, etc..) setting, is a open field of research in ML. So, there is no formula, follow these tips:

2) You need enough neurons as you have curves, because each neuron plots one sigmoid in graph, you will have better results with more neurons, but this improvement will decrease as you insert neurons, so, don't use more network parameters (more neurons implies more weights and biases) than your training samples. Giving you a range of 2 to 7 neurons.

3)You need enough training that gives you more chance to have a good approximation mostly times, without too much training time. Try increasing epochs.

4) Each layer plots one curve (called decision boundary) in graph. You have just one curve to approximate. You use more layers in another kinds of problems, like classification.

6) Your are using random values, that will affect network behavior. To mitigate this, try changing network parameters as in 1) and 3). With right parameters, function will be approximated.

Not the answer you're looking for? Browse other questions tagged machine-learning neural-networks approximation perceptron or ask your own question.