Proving Bernoulli is the limit of Beta

It's clear to me by inspection that if we fix $\beta = \frac{1-\mu}{\mu} \alpha$ (thereby fixing the mean) and let $\alpha \rightarrow 0$, the Beta distribution approaches a Bernoulli($\mu$) distribution. 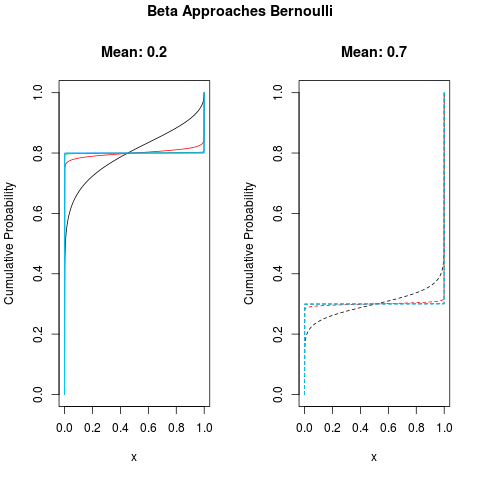 Where $Y \sim$ Bernoulli($\mu$), and the convergence is non-uniform. I tried to do a more formal proof of this but couldn't make any progress, even in simple cases (like $\mu = \frac12$). The Wikipedia page on Beta makes reference to the $\mu = \frac12$ case several times without proof. Perhaps I'm missing something easy about doing the integral, or some fact about the Beta/incomplete Beta function. Any help would be appreciated!

The analysis can be a little messy, especially if carried out with full and elementary rigor, but the idea is simple and easily grasped. Focus on small regions very close to $0$ and $1$. As $\alpha$ and $\beta$ approach $0$, almost all the probability of a Beta$(\alpha,\beta)$ distribution becomes located within these regions. By shrinking the sizes of the regions, we see that the limiting distribution if one exists can only be a Bernoulli distribution. We can create a limiting distribution only by making the ratio $\alpha:\beta$ approach a constant, exactly as described in the question.

The nice thing about this analysis is that looking at relative areas obviates any need to consider the behavior of the normalizing constant, a Beta function $B(\alpha,\beta)$. This is a considerable simplification. (Its avoidance of the Beta function is similar in spirit to my analysis of Beta distribution quantiles at Do two quantiles of a beta distribution determine its parameters?)

A further feature of this analysis is approximating the incomplete Beta function by simple integrals of the form $\int t^c\mathrm{d}t$ for constants $c\gt -1$. This reduces everything to the most elementary operations of Calculus and algebraic inequalities. 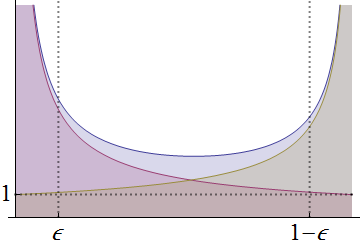 What happens to the three areas under $f$, relative to each other, in the limit?

because $\alpha-\beta \approx 0$. Consequently, since $\alpha\to 0$, eventually the middle area is inconsequential compared to the left area.

The same argument shows that eventually the middle area is close to $\beta/\epsilon$ times the right area, which also becomes inconsequential. This shows that

By keeping the mean constant, this ratio remains constant, allowing us to add one more observation to $(*)$:

Now contemplate $\epsilon$ shrinking to zero. The result is that the limiting distribution exists and it must have all its probability concentrated around the values $0$ and $1$: this is the class of Bernoulli distributions. $(**)$ pins down which one: since the Bernoulli$(p)$ distribution, whose mean is $p,$ assigns probability $p$ to $1$ and probability $1-p$ to $0$, the ratio $p/(1-p)$ must be the limiting ratio $\lambda.$

Not the answer you're looking for? Browse other questions tagged convergence beta-distribution bernoulli-distribution or ask your own question.

0
Issue with proof in Statistical Theory related to Beta and Binomial distributions
9
Do two quantiles of a beta distribution determine its parameters?

1
Sum of Beta-Bernoulli variables
3
Bernoulli Trials and Bayes Rule for a Beta Distribution?
2
Bernoulli or binomial likelihood, beta prior. Marginalize over success probability
4
Update samples of a Beta with Bernoulli likelihood to the Beta posterior
0
Scale at which beta distributed variable breaks down to Bernoulli trials
0
proving consistency for a sequence of Bernoulli random variables
8
Limit of beta-binomial distribution is binomial
3
Entropy of the beta-binomial compound distribution