Here are two plots of “total lean” and “total fat” respectively. As you can see, the LUNAR machine measures “total lean” a bit higher than the other two machines. When looking at “total fat”, the machines seem to disagree especially for the women with more fat. 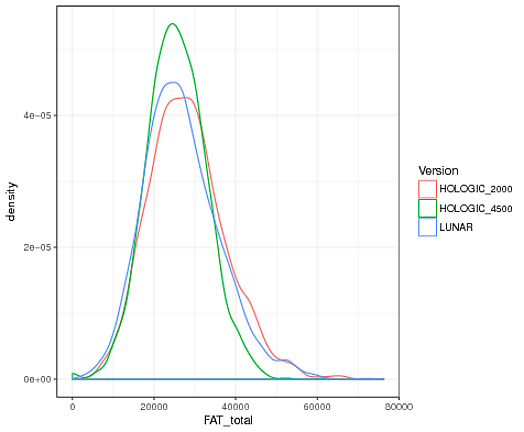 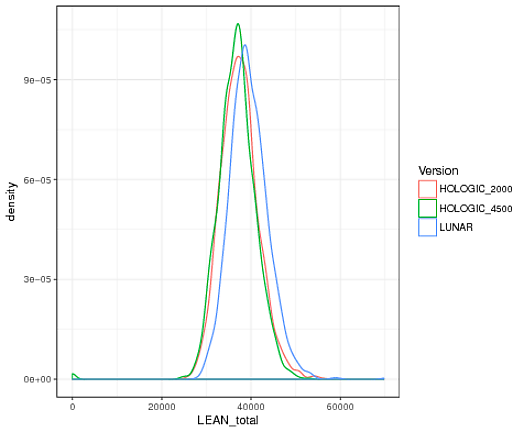 In order to treat these three groups as one group, and make the DXA-measurements comparable, I have calculated z-scores for each population, and thereby normalized them.

Is this a reasonable thing to do? Will I still be able to calculate a ratio using these values?

I would like to know if there is a better way to correct for the fact different machines have been used without having reference values/ double measurements.

Someone suggested I use EM but im not certain how I would do this.

Normalizing the measurements is a good thing to do. You can normalize the weight, and therefore the ratio of these two quantities will then be free of the bias of having used different machines, as well as will be easily interpretable since both the denominator and the numerator are on the same scale and have the same units.

Another thing that could have been possible is to consider one of these machines as the gold standard, and evaluate the remaining machines in an independent run of the experiment, where you run the same person through different machines, so as to obtain a correction factor for the other machines to render their values comparable. Assuming you do not have the liberty to run an independent experiment to obtain such a data, you can also try to develop a correction factor from this data, by trying to fit the curve obtained by the other machine to the curve of the gold standard. Either way, you need to have a subjectively ascertained gold standard.

Not the answer you're looking for? Browse other questions tagged r normal-distribution normalization population or ask your own question.

7
How to compare two groups with multiple measurements for each individual with R?
8
When making inferences about group means, are credible Intervals sensitive to within-subject variance while confidence intervals are not?
1
If you know a normal distribution's population variance, does a sample variance tell you nothing about the sample's mean's confidence interval?
2
Fitting a binomial model to test the reaction of two groups to a treatment with a control site
0
Re-sampling with replacement a longitudinal dataset in R