I'm looking at the Schoenfeld residuals of a competing risks survival model for one of the covariates. There is an extreme point which I am struggling to interpret. 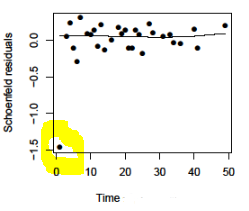 Schonfeld residuals are calculated as the difference between the observed value of the covariate for the individual having the event, and its expected value. The latter is calculated using, as weight, the probability that each individual (corresponding to a given value of that covariate) experiences the event. It is different from the usual kind of residuals: here we are not observing the outcome conditional on covariates, but the covariate conditioning on the outcome (in this case, observed time to event). Usually, interest is on whether a pattern (typically, an increasing or decreasing trend) may be identified, and not on single observations, as a test for proportional hazard. Global tests for departure of covariates from proportionality (thus, on constancy of the associated parameters) have been developed: in fact, Schonfeld residuals may be seen as local (in time) deviances from the $\beta$ parameter associated to the given covariate, i.e.: $r_S(t)=\beta(t)-\beta$. See, for example, Grambsch and Therneau (1994), and references therein. Coming to your case: a very small Schoenfeld residual corresponds to a very small value of the covariate vs a weighted average of observations that have not experienced the event yet. It seems it's the first observation to experience the event, so I'd say you have an observation with a very small covariate value, that is also the first one to fail. I would take a look at that observation to see whether this information is interesting, and would also check whether its inclusion affects estimates strongly.

Not the answer you're looking for? Browse other questions tagged survival competing-risks schoenfeld-residuals or ask your own question.