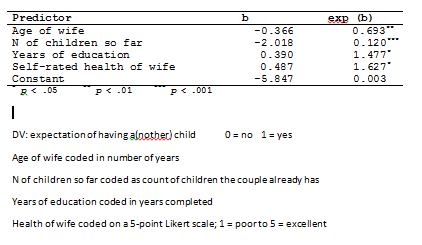 The above is all the info I was given to work with.

For the b column, are higher bs indicative of stronger association? What could the constant mean?

What does the exp (b) column mean (how do I interpret it)?

Before we start with the interpretation of the $b$s make sure you know what logarithms and exponentials are.

$exp(b)$ means nothing else than $e^b$. $e$ is a constant with a never ending number of digits. Approximately, $e=2.718$. $e$ is very important constant in mathematics as it shows up in many different places (just like $\pi$). So lets say we have an equation like $e^x=12$ we can solve it using the logarithm: $ln(12)=x$ (In general it is very useful to look deeper into exponential functions and logarithms. There are excellent explanations from elementary mid-school explanations to university grade explanations on khanacademy.org for free).

This is the same thing as stating:

this term on the left side is called logit:

So why am I telling you all this? $b$ and $exp(b)$ give you the same information but in a different way.

Generally speaking: the further away $b$ from $0$ and the $exp(b)$ from $1$ the greater the association between this predictor (IV) and the criterion (DV).

I hope this helps. One remark though: It seems as you are a statistics and math beginner. However, when it comes to statistical inference from logistic regression (Which will be the next logical step) things become even more complex when you have to deal with null deviance and Likelihood ratio tests instead of F tests and $R^2$ as in "regular" linear regression. I would therefore recommend to ask a friend or college who may know this stuff and help you a bit.

EDIT: the constant is the intercept. So if all values Age, children, health... are ALL 0, then the predicted logit would be -5.847 and the predicted odds ratio 0.003.

Not the answer you're looking for? Browse other questions tagged regression self-study logistic or ask your own question.