This is a basic question about confidence intervals. So the standard way to estimate a confidence interval.Assuming we have a set of $N$ random variables $\{X^i\}$ such that all of them are i.i.d. We know that the mean of is converges to the central limit of a $N(\mu,\frac{\sigma^2}{N})$, where $\mu$ is the true mean of $X^i$ and $\sigma^2$ is the true variance of $X^i$. Note: we are not assuming $X^i$ are normally distributed. The confidence interval can be estimated

where $s$ is the square root of the sample variance. The idea to me here is quite simple. Assuming $N$ is large enough, we carry out an experiment ONCE, compute $\bar{x}=\frac{1}{N}\sum x^i$, which is an unbiased estimate of $\mu$ and compute $s=\frac{1}{N-1} \sum (x^i-\bar{x})^2 $ which is an unbiased estimate of $\sigma^2$. So our confidence interval gives as the uncertainty of repeating the experiment $M$ times, i.e. if we repeated $M$ times we will expect $\mu$ to be inside the confidence interval 95% of the time. In code this can be written as,(this can also be seen as estimating only mean and variance of a single random variable)

Note: I am assuming i.i.d and I will come to a situation where I am uncertain whether i.i.d applies and if it doesn't how do we compute non-i.i.d confidence intervals.

I am constructing a particle filter estimating , $p(x_t|y_{1:t})$. I want to estimate confidence intervals for the mean estimates of my particles at time $t$. I hypothesize that my mean estimates are the best estimate of the state,although this is not entirely true. In effect I have an approximation of , $p(x_t|y_{1:t})$ by a set of weighted samples $\{x^i_t, w^i_t\}$. Therefore, I compute the weighted mean

I intend to compute two quantities the variance of $\bar{x}_t$ and the confidence intervals around $\bar{x}_t$.The purpose of this is really to see how frequent resampling occurs effects variance, therefore, keep in mind that I may have resampled my particles $\{x^i_t, w^i_t\}$ from the previous time step and the index $i$ is not representative of the particle at time $t-1$.

How do I calculate the variance?

EDIT: in response to @Taylors comments 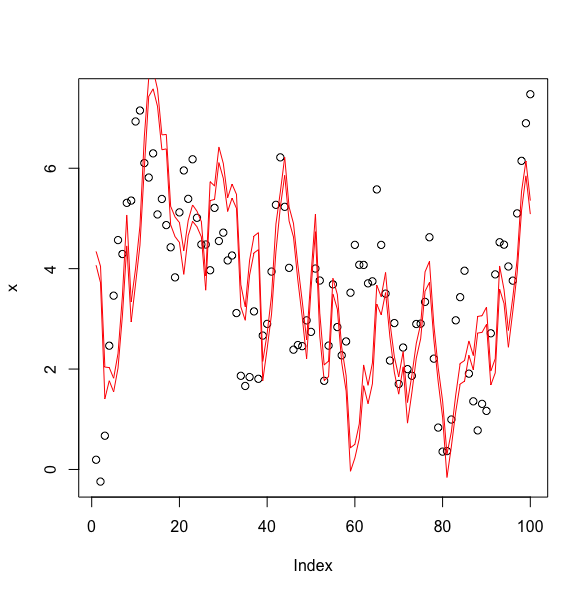 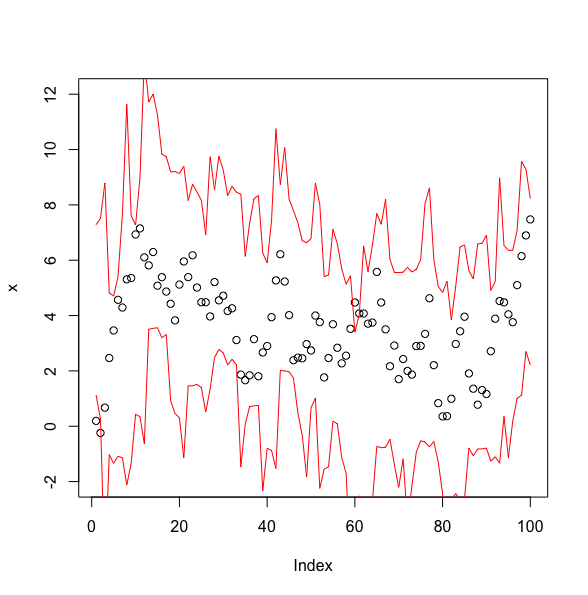 As you can see that my constructed confidence intrevals which are shown by the two red lines are too narrow. My true states which are shown by black dots are outside of the interval too frequently. I am using a simple random walk with fixed process variance of 1 and measurement variance of 3. The narrow interval was when I divide by $\sqrt{N}$ and the wide interval is when I don't divid by $\sqrt{N}$

You might want to check your formulas for the sample means and sample standard deviations once you start talking about particle filters. Also, the particles are not independent if you are resampling. But they are identical. I think you have that backwards.

Otherwise, if you weren't resampling, you would just be using the Law of Large Numbers, more basic Central Limit Theorems, and Slutsky's theorem to guarantee that sample means and standard deviations are the way to go. You've been asking a lot of questions about the Doucet/Johansen tutorial lately, and that tutorial mentions a few sources on the theorems you're asking about. Specifically they say:

SMC methods involve systems of particles which interact (via the resampling mechanism) and, consequently, obtaining convergence results is a much more difficult task than it is for SIS where standard results (iid asymptotics) apply. However, there are numerous sharp convergence results available for SMC; see [10] for an introduction to the subject and the monograph of Del Moral [11] for a complete treatment of the subject. An explicit treatment of the case in which resampling is performed adaptively is provided by [12].

Regarding (2) and (3), you probably never want to simulate your observed data.

Not the answer you're looking for? Browse other questions tagged bayesian confidence-interval particle-filter or ask your own question.

0
How to use a particle filter for Bayesian inference?
2
Are particle filters necessarily linked to state-space models?
3
Does the Auxiliary Particle Filter not ordinarily yield estimates for $p(y_t|y_{1:t-1})$
2
Particle Degeneracy: Variance of the weights
2
Bootstrap filter
1
Particle filter for likelihood evaluation