I am just starting out self-learning in time series analysis. I have noticed that there are a number of potential pitfalls that are not applicable to general statistics. So, building on What are common statistical sins?, I would like to ask:

What are common pitfalls or statistical sins in time series analysis?

This is intended as a community wiki, one concept per answer, and please, no repetition of more general statistical pitfalls that are (or should be) listed at What are common statistical sins?

EDIT: In response to naught101's question about "foolish", my answer may be wrong but it seems to me that most real-world phenomenon don't increase or decrease continuously forever. Most processes having limiting factors: people stop growing in height as they age, stocks don't always go up, populations cannot go negative, you can't fill your house with a billion puppies, etc. Time, unlike most independent variables that come to mind, has infinite support, so you really can imagine your linear model predicting Apple's stock price 10 years from now because 10 years from now will surely exist. (Whereas you wouldn't extrapolate a height-weight regression to predict the weight of 20-meter-tall adult males: they don't and won't exist.)

In addition, time series often have cyclical or pseudo-cyclical components, or random walk components. As IrishStat mentions in his answer, you need to consider seasonality (sometimes seasonalities at multiple time scales), level shifts (which will do strange things to linear regressions that don't account for them), etc. A linear regression that ignores cycles will fit over a short-term, but be highly misleading if you extrapolate it.

Of course, you can get into trouble whenever you extrapolate, time-series or not. But it seems to me that we too often see someone throw a time series (crimes, stock prices, etc) into Excel, drop a FORECAST or LINEST on it and predict the future via essentially a straight line, as if stock prices would rise continuously (or decline continuously, including going negative).

Paying attention to correlation between two non-stationary time series. (It is not unexpected that they will have a high correlation coefficient: search on "non-sense correlation" and "cointegration".)

For example, on google correlate, dogs and ear piercings have a correlation coefficient of 0.84.

For an older analysis, see Yule's 1926 exploration of the problem

At the top level, Kolmogorov identified independence as a key assumption in statistics - without i.i.d assumption, many important results in statistics aren't true, whether applied to time series or more general analysis tasks.

Successive or nearby samples in most real-world discrete-time signals are not independent, so care must be taken to decompose a process into a deterministic model and a stochastic noise component. Even so, the independent increment assumption in classical stochastic calculus is problematic: recall the 1997 econ Nobel, and the 1998 implosion of LTCM which counted the laureates among its principals (though to be fair, the fund's manager Merrywhether likely is more to blame than quant methods).

Defining Trend as a Linear growth over time .

Although some trends are somehow linear (see Apple stock price), and although time series chart looks like a line chart where you can find linear regression, most trends are not linear.

There are Step changes like changes when something happened in a specific point in time that changed the measure behavior ("The bridge collapsed and no cars is going over it since").

Another popular trend is "Buzz" - exponential growth and a similar sharp decline afterward ("Our marketing campaign was a huge success, but the effect faded after couple of weeks").

Being too certain of your model's results because you use a technique/model (such as OLS) that does not account for a time series' autocorrelation.

I don't have a nice graph, but the book "Introductory Time Series with R" (2009, Cowpertwait, et al) gives a reasonable intuitive explanation: If there is a positive autocorrelation, values above or below the mean will tend to persist and be clustered together in time. This leads to a less efficient estimate of the mean, which means that you need more data to estimate the mean to the same accuracy than if the there were zero autocorrelation. You effectively have less data than you think you do.

The OLS process (and therefore you) assume that there is no autocorrelation, so you are also assuming that the estimate of the mean is more accurate (for the amount of data you have) than it actually is. Thus, you end up being more confident of your results than you should be.

(This can work the other way for negative autocorrelation: your estimate of the mean is actually more efficient than it would be otherwise. I have nothing to prove this, but I'd suggest that positive correlation is more common in most real-world time series than negative correlation.)

The impact of level shifts , seasonal pulses and local time trends ... in addition to one-time pulses. Changes in parameters over time are important to investigate/model. Possible changes in variance of the errors over time have to be investigated. How to determine how Y is impacted by contemporaneous and lagged values of X . How to identify if future values of X can impact current values of Y. How to find out of particular days of the month have an impact. How to model mixed frequency problems where hourly data is impacted by daily values ?

naught asked me to provide more specific information/examples on level shifts and pulses. To that end I now include some more discussion. A series that exhibits an ACF suggesting non-stationarity is in effect delivering a "symptom". One suggested remedy is to "difference" the data. An overlooked remedy is to "de-mean" the data. If a series has a "major" level shift in the mean (i.e.intercept) the acf of this entire series can be easily misinterpreted to suggest differencing. I will show an example of a series that exhibits a level shift.If I had accentuated (enlarged) the difference between the two means the acf of the total series would suggest (incorrectly ! ) the need to difference. Untreated Pulses/Level Shifts/Seasonal Pulses/Local Time Trends inflate the variance of the errors obfuscating the importance of model structure and are the cause of flawed parameter estimates and poor forecasts. Now on to an example . Th 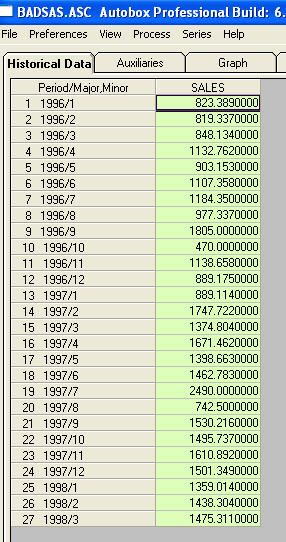 is is a list of the 27 monthly values. This is the graph 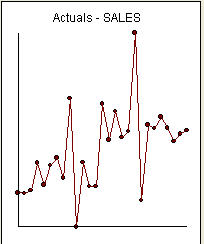 . There are four pulses and 1 level shift AND NO TREND ! 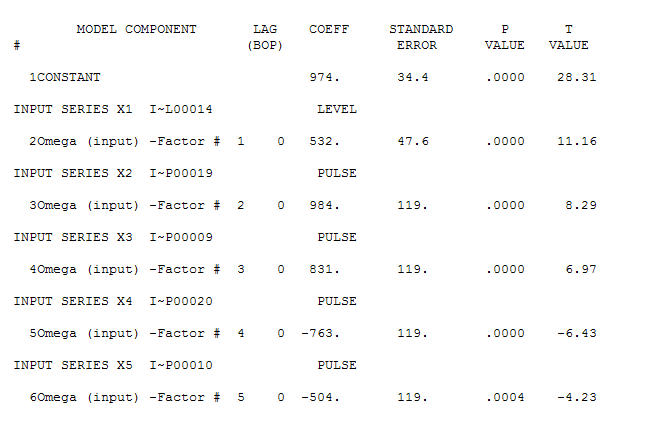 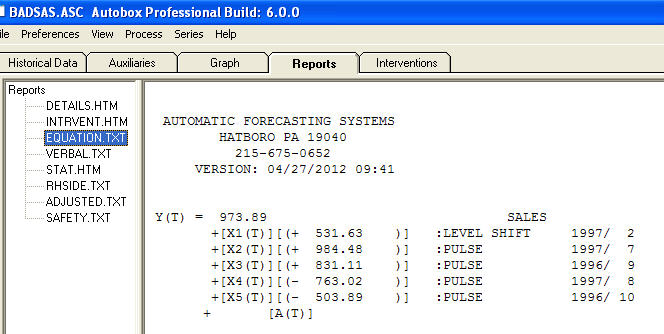 . The residuals from this model suggest a white noise process 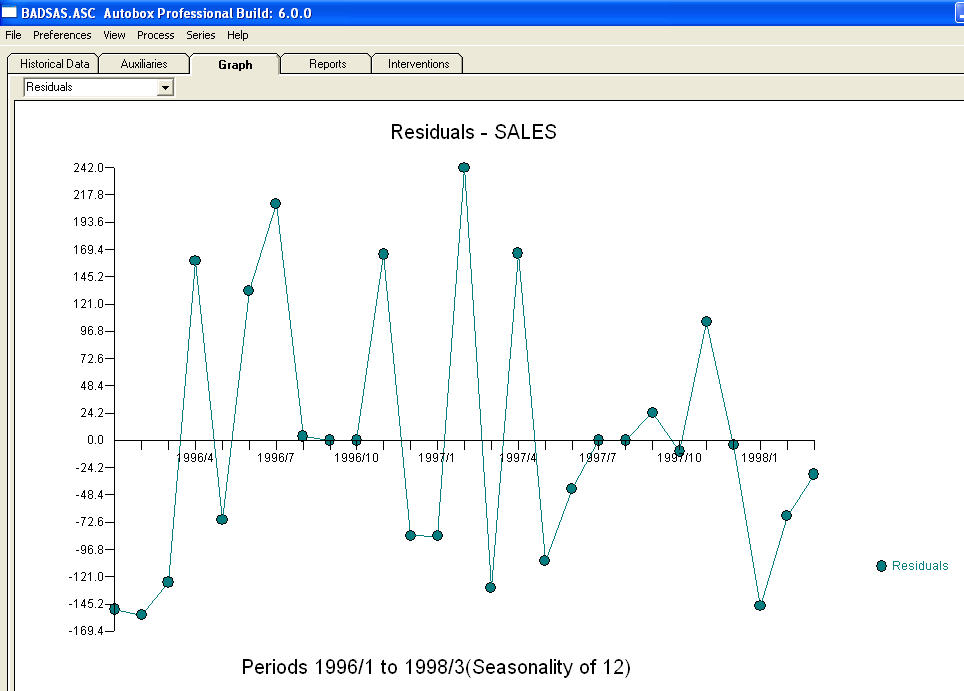 . Some (most !) commercial and even free forecasting packages deliver the following silliness as a result of assuming a trend model with additive seasonal factors 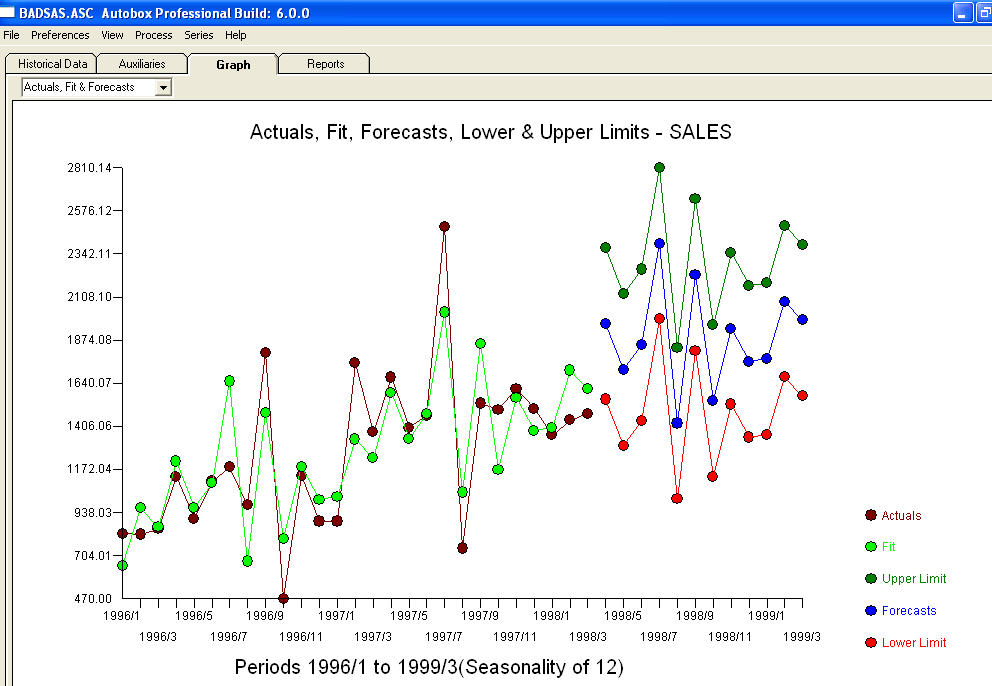 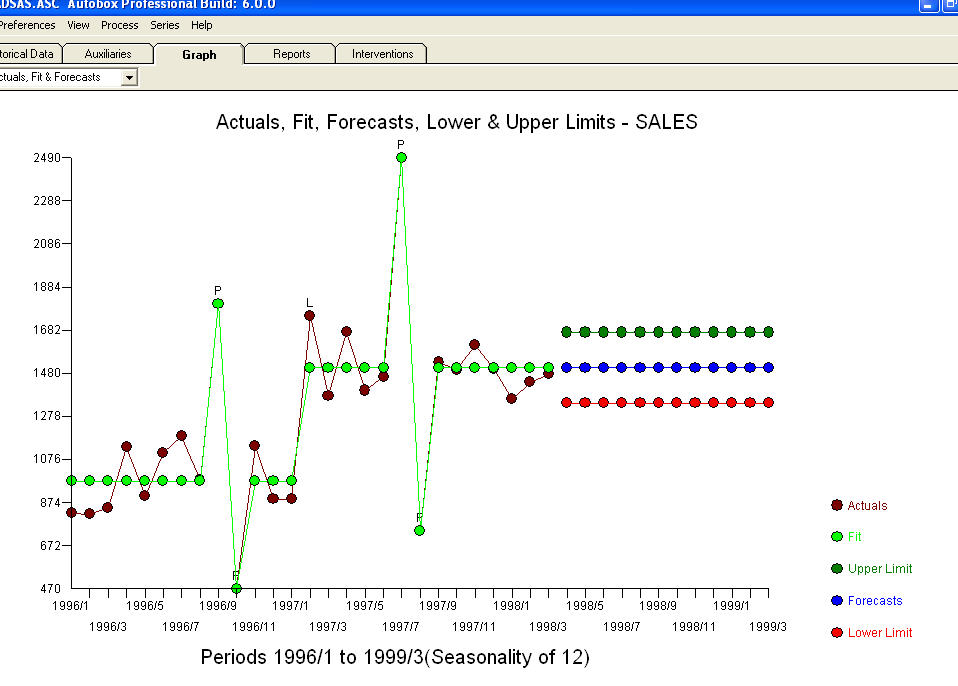 In addition to some great points that have already been mentioned, I would add:

These problems are not related to the statistical methods involved but to the design of the study, i.e. which data to include and how to evaluate the results.

The tricky part with point 1. is making sure that we have observed a sufficient period of the data in order to make conclusions about the future. During my first lecture on time-series, the professor drew a long sinus curve on the board and pointed out that long cycles look like linear trends when observed over a short window (quite simple, but the lesson stuck with me).

Point 2. is especially relevant if the errors of your model have some practical implications. Among other fields, it is being widely used in Finance, but I would argue that evaluating the forecasting errors in past periods makes a lot of sense for all time-series models where the data allows it.

Point 3. touches again on the subject of which portion of past data is representative of the future. This is a complex topic with a large amount literature - I will name my personal favorite: Zucchini and MacDonald as an example.

Avoid Aliasing in sampled time series. If you are analyzing time series data that is sampled at regular intervals, then the sampling rate must be twice the frequency of the highest frequency component in the data you are sampling. This is the Nyquist sampling theory, and it applies to digital audio, but also to any time series sampled at regular intervals. The way to avoid aliasing is to filter out all frequencies above the nyquist rate, which is half the sampling rate. For example, for digital audio, a sample rate of 48 kHz will require a low-pass filter with a cutoff below 24 kHz.
The effect of aliasing can be seen when wheels appear to spin backward, due to a strobiscopic effect where the strobe rate is close to the rate of revolution of the wheel. The slow rate observed is an alias of the actual rate of revolution.

373
What is your favorite "data analysis" cartoon?
250
What are common statistical sins?
43
Why law of large numbers does not apply in the case of Apple share price?
7
How to determine if there is a drop in revenue after a change in the system?
4
Estimating the effect of one time series on another in the context of personal health