I'm using the standard formula for the confidence interval for standard deviation:

By mistake I entered a very low confidence level and I noticed that the resulting interval did not include the calculated standard deviation. This happens when the confidence is sufficiently low (e.g. 10%).

Can someone explain me the reason? I've double checked the results with Minitab and they are correct.

[Aside: We're using a chi-squared distribution to obtain the confidence interval because this interval is obtained assuming we're sampling from a normal distribution.]

While the interval for $\sigma$ not including the observed sample value of $s$ might at first glance seem surprising, it occurs for the simple reason that the distribution of a chi-squared random variable doesn't have its median at its degrees of freedom (that's where its expected value is, but the distribution is skewed -- the median is below the d.f.). For example, with $\nu=3$, the expected value ($3$) is nearly at the 61st percentile.

Now for $\alpha$ near 1, $\alpha/2$ and $1-\alpha/2$ will both be very close to $\frac12$ and so the corresponding percentage points of a chi-square will be very close to the median. Consequently, if $\alpha$ is large enough (i.e. if the coverage of the interval, $1-\alpha$, is small enough), both percentage points can turn out to be below the mean, as in this example: 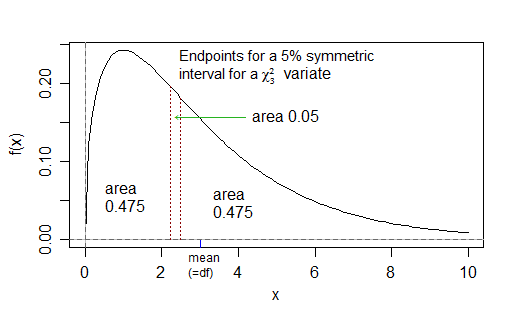 As a result of that, the chi-square percentage points divided by the degrees of freedom can both be below 1. If that happens, this makes both ends of the interval for $\sigma$ larger than $s$ (the sample standard deviation).

We should tend to see similar effects occur with other intervals that result from skewed distributions.

Not the answer you're looking for? Browse other questions tagged confidence-interval chi-squared-test standard-deviation or ask your own question.