Ask Question
Asked 5 years, 3 months ago
Modified 7 months ago
Viewed 12k times
9
$\begingroup$
This question already has an answer here:
How to interpret coefficients in a Poisson regression? (1 answer)
Closed 5 years ago. 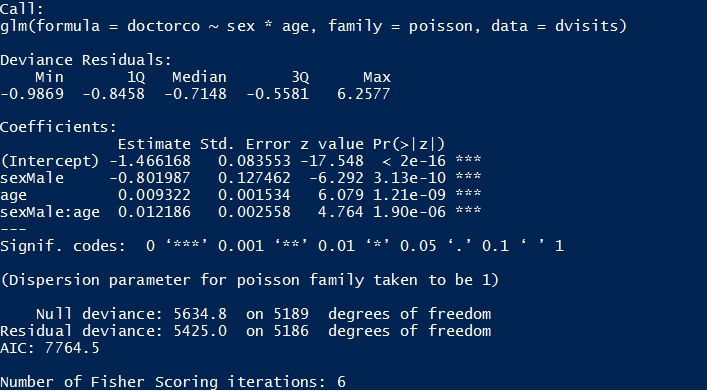 I saw some interpretations online but almost all of use use the main effects or just one effect to explain. Also, the answers on stack exchange are not so simple that a layman could understand. Thank you in advance.

This is the back transformed data with intervals.

I drew some preliminary inferences,

The three independent variables here are all equal to zero when you have a female with age zero. So the expected number of visits for a female with age zero is $\exp(-1.466168) = 0.23$ That's the meaning of the intercept. If you take its exponential, you get the baseline number of visits, where the baseline means that all the independent variables are set to zero.

So, overall, you expect about half the number of visits for newborn males compared to females, but the expected number of visits increases with age at about twice the rate it does for females.

The AIC isn't helpful in isolation. You'd compare it to the AIC of some alternative model. Roughly speaking, whichever model has a lower AIC has a better fit after adjusting for the number of parameters.

You can use the deviance to do a goodness-of-fit test; basically, whether whatever unexplained variation is due to the kind of random variation you'd expect from a Poisson distribution.

There isn't a closed-form solution for the parameters of the Poisson model in general; they have to be computed using numerical methods. The Fisher scoring iterations tell how many iterations the optimizer had to go through before the deviance (I think) was minimized to within some acceptable tolerance. You would probably only worry about this if the number of iterations were really high, which might point to a poorly-specified model (which you would probably spot from abnormally large parameter values and/or standard errors anyway).

80
How to interpret coefficients in a Poisson regression?
9
Interpretation of interaction term