In my firm I am developing a model using a probit model. I noticed that when benchmarking with a logit specification, the logit slightly improves the model goodness-of-fit.

Talking with a colleague he argued that, this is purely luck because the probit and logit are very similar. He also said that I can apply a monotonic transformation to my data and get better results with a probit.

What's the intuition behind this argument?

Details: I regress a binary variable taking the value 1 if an individual is in financial distress. The data cover a period of 20 years for 1000 individuals. The probit function has the following form $P(Y=1|X)=\Phi(X\beta)$ while the logit function is given by $P(Y=1|X)=\frac{1}{1+e^{-X\beta}}$. The explanatory variables are some macro variables such as GDP, unemployment etc. I computed then an average for the actual vs predicted values across all individuals and for each year. I could then compute a $R^2$ given by the correlation between actual and predicted values squared. When repeating the process with logit I noticed a slightly better increase

Does this mean that you have data for each individual each of the twenty years? In that case, you should account for that in the modeling (with time series methods or, maybe, a random effect for each person). Apart from that, sample size here is sufficiently large that the better fit with logit just might be real. If it gives better prediction is more doubtful.

My reason for saying so is the following: The logit function approaches its asymptotes much more slowly than the probit. We can take logit coefficients and divide by approximately 1.6 to get probit coefficients, see http://andrewgelman.com/2006/06/06/take_logit_coef/ Then we can make the following plot comparing the two models: 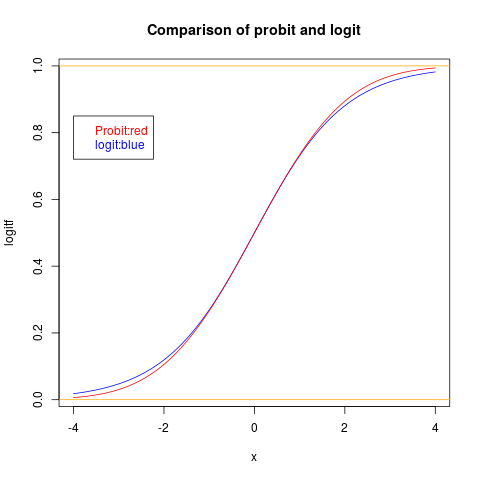 I once had a large bioassay dataset where probit fit (marginally) better than logit. In that case the explanation is clear: the probit, going faster close to $0 / 1$, models better that above certain toxicity level, all the organisms die (and below certain level, there is no toxicity at all). In your case it is the opposite: The covariables can never predict with certainty a default (or not), so the probit gives oversecure predictions, and for that reason the logit is better. With your kind of data I would use the logistic fit for risk calculations in future, even if the probit had happened to fit better under training! (that of course is a kind of Bayesian thinking, if the data goes against prior information, sometimes it is better to stick to the prior!)

Also look at Difference between logit and probit models

Not the answer you're looking for? Browse other questions tagged logit probit or ask your own question.

349
Difference between logit and probit models
4
Where is penalized probit regression?