Is my method for determining any sort of correlation between an ordinal variable and a continuous variable correct?

This data concerns an experiment my startup ran. We measured users' Interpupillary distance (the distance between their pupils), and then asked them to rate how satisfied they felt utilizing our Virtual Reality headsets.

So here I have one ordinal variable (Satisfaction), and one Continuous variable (Interpupillary distance). I decided to do a Spearman's rank correlation test: using that, I got a value of Spearman's Rank of -0.6935. This suggests a relatively strong negative correlation. However, when you graph my data, it makes no sense at all: here are graphed the ranks of each variable (x axis = IPD, y axis = satisfaction): 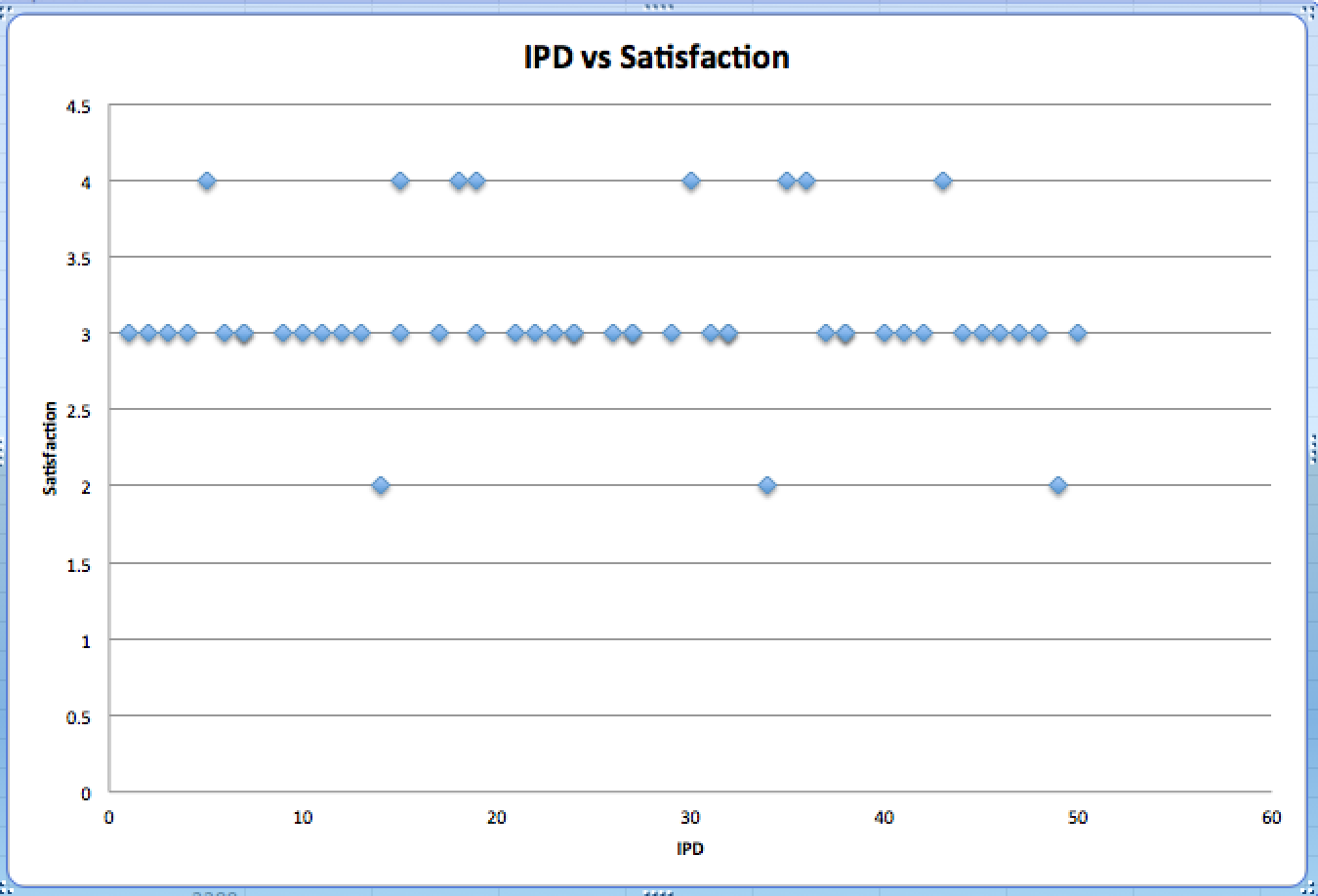 So, what exactly is going on? Am I using the wrong test? I am certain I did my calculations to arrive to my value of spearman's rank correctly.

Would greatly appreciate someone's help, thanks!

This isn't so much a problem with calculation as it is about sample size and knowing the limitations of correlation.

All correlation is attempting to do, is measure how close points are to an imaginary best fit line.

When you use Spearman's rank correlation, the line is drawn after ranking the data instead of the original scale.

If one of your variables have 0 variance, correlation will be undefined.

Consider the same variable, but introduce a single outlier. Suddenly it will show up as a measurable correlation, which is absurd based on your knowledge that it is simply a single fluctuation.

In your case, the satisfaction scores end up doing this. Even if by pure chance a few respondents rated you 4 or 2, it shows up as an apparent correlation.

The effect of this can only be minimized if your ordinal variable has maybe 10 levels instead of just 4. With a greater number of unique values and a larger sample this will then start approximating a continuous variable in which case correlation might actually tell you something useful.

You are probably better off running ANOVA in your case, but with only 50 samples I doubt that will lead to any reliable result either.

Looking at your data plot I see that - regardless of the IPD - all users are satisfied (= 3). I would not expect that the variables show a (a) significant and (b) meaningful correlation.