How to describe variation on multiple levels?

This is continuation for a series of questions (1, 2). I have a data set from an experiment with 2x2 design. A replicate consists of 20-50 normally distributed replicate measurements. Each treatment combination has 3 of these replicates. Measured average response for each replicate seems not to be normally distributed. 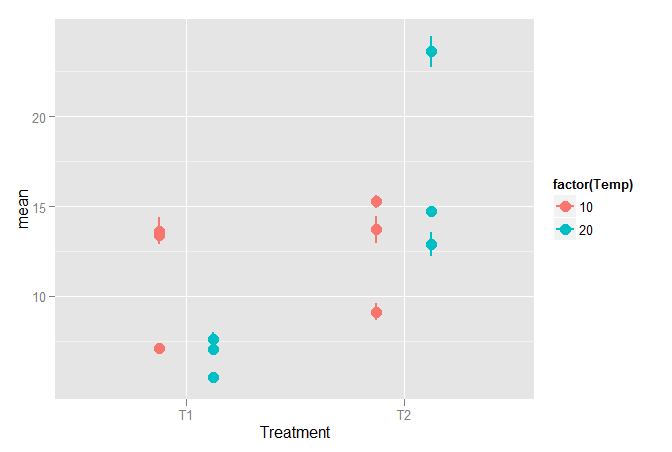 Since this is an experiment and I am supposed to talk about an effect of a treatment, I would like to combine the variation within measurements (error bars) and between replicates (dots in the figure) into one number / treatment combination and use the error bars with one mean value to show the overall effect of a treatment (a dot instead of three). Ideally I would like to use confidence intervals of some sort (asked here). I have understood that since this is an unbalanced nested design, I should use mixed models or a simple 2-way ANOVA for mean values, but how to compress the variation on two levels into one figure?

Would the delta method be something for me?

R code with an example of the data:

r confidence-interval delta-method
Share
Improve this question
edited May 23 '17 at 12:39

If for a moment you assume $n_i=n$, then the variance is $\frac{\tau^2}{k} + \frac{\sigma^2}{n}$. In your application the key observation is that $n >> k$, so the first term will dominate. In essence, you can ignore the within-day replicates, and just use them as an expensive way to obtain one (day-specific) observation.

I have run a "correct" mixed ANOVA analysis and a simple ANOVA on group means, and they give essentially the same result:

Not the answer you're looking for? Browse other questions tagged r confidence-interval delta-method or ask your own question.