My dataset consists of transactions at the daily level; they can be negative or positive, for a total of one year of data. 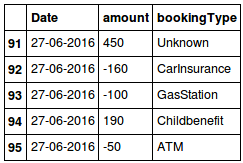 I want to fit a model that predicts daily transactions, spendings or income, lets say for one extra month.

My dependent variable will be transaction amount; my features will be a set of variables, in this example, just day and type of transaction.

I want to fit a naive linear regression. 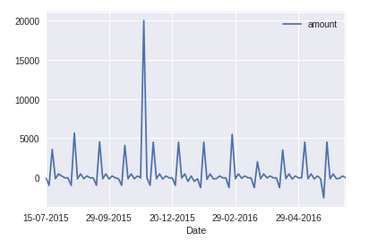 a. I can see a clear (positive) outlier in the data. My regression will be extremely sensitive to that data point. If the amount variable would have been just positive, I would have taken the log. What to do here instead?

b. Is there any approach other than regression that could relax for the presence of the outliers? Given the obvious seasonality of the data, a time series approach would be more appropriate? Any hint?

Yes, there are several methods you can use in which you can keep the outlier in your model (because it can still tell you something useful), but limit its effect on the linear regression coefficients.

These methods are referred to as Robust Regression. Basically, these methods place weights on the observations based on the residuals to reduce the effect of outliers on your regression function.

In R: LAD() in Quantreg package.

Here you want to minimize the median squared deviation:

In R: lmsreg(Y~X) in MASS package.

Here you want to calculate weights for each observation. Two popular methods (sometimes combined using Huber for the first iteration and Bisquare for all other iterations is common) are the Huber weight function ($w_{h}$) and the Bisquare weight function ($w_{b}$). You can continue the process of calculating your regression model using the weights with several iterations until your coefficients converge.

In R: rml(Y~X, method = ) where method = mm is the Bisquare method and the default is Huber.

Not the answer you're looking for? Browse other questions tagged regression multiple-regression linear-model outliers or ask your own question.

2
Outlier detection in short time series with two seasonalities
2
Finding correlations between aggregated and non aggregated data
0
Does the presence of an outlier increase the probability that another outlier will also be present on the same observation?
5
Panel data: OLS assumptions
7
Handling outliers in Bayesian linear regression
7
Robust time-series regression for outlier detection
3
Outlier removal before Boosted Decision Tree Regression