not all the samples are from the same location

almost all the samples are from the same location 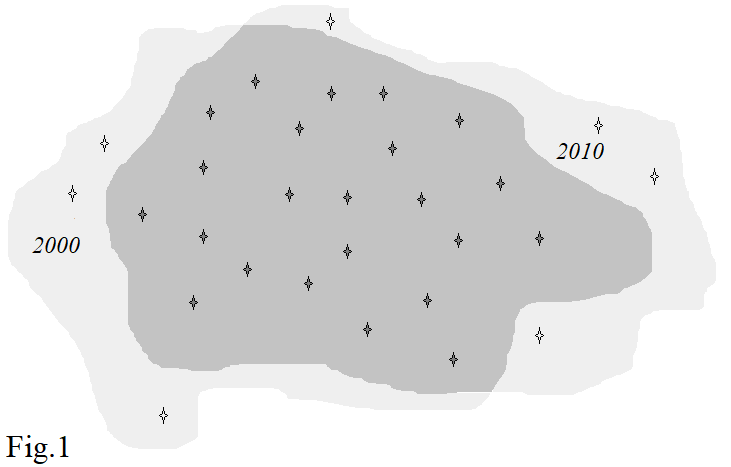 Focusing only on the intersection of the two years spatial support

You can build a $2D$ kriging-interpolated continuum on which you can then project a grid whose peremiter consists of the convex envelope of the set of points belonging to the intersection described above (and shown in $\rm{Fig.1}$). The nodes of the so-projected grid are going to be used as "individuals" within the bootstrapping proccess. Like so (see $\rm{Fig.2}$), each node will have year-$2000$ and year-$2010$ concentrations attached.

And finally (also reusing your notation for covariance)

Naturally, I could have skipped step 2, computing directly the three empirical bootstrap means, e.g. $\hat{E}(C_{2000}) = \frac{1}{kn} \sum_{b=1}^k \sum_{i=1}^nC_{b,i,2000}$ The critical points in this approach are (i) how such it is possible for the practician to bootstrap over his grid nodes and (ii) how such she can access data related to each grid node and process them (computing and storing results) My sources are theoretical: using the two definitions of bootstrapping and covariance.
share | cite | improve this answer | |
edited May 14 '17 at 2:39
answered May 13 '17 at 13:49

Not the answer you're looking for? Browse other questions tagged covariance spatial kriging or ask your own question.