So I am using a linear regression with time as a trend variable (specifically, I am taking the # of months since user's first activity as the linear feature of time, and also including the log, sqrt, squared, etc., transformations of that for non-linear time features) and dummy variables for 11/12 months of the year to account for seasonality. I will use forward selection of some sort to pick time features.

My time series is a bit ridiculous, so I find that trend often changes as time goes on. Check out the attached image for one that I am looking at 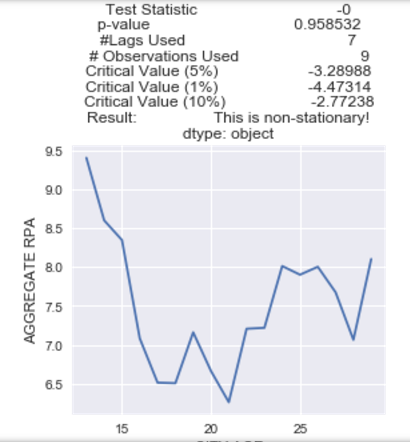 I do not think the fact that user_age_in_months is greater at more recent periods than in the first few periods makes a significant difference, especially since I am min-max scaling, and this is different from an exponentially weighted moving average.

This is the closest answer I've seen to this question, but it doesn't really give an example and this isn't as applicable to Python: Assigning more weight to more recent observations in regression

Many ML packages give you an option to specify sample weights out of the box. One of the answers to the CV question that you cited gives an example of how this can be done in R. In Python ecosystem, scikit-learn provides an analogical parameter (sample_weight) that you can pass to many different regression models (linear, trees, SVMs, see e.g. here) while fitting.

You can use an arbitrary function to calculate the weights for each sample (in this case, that could be an exponential function of time), and pass it as a Numpy array.

Not the answer you're looking for? Browse other questions tagged regression time-series python weighted-regression or ask your own question.