AIC and BIC criterion for Model selection, how is it used in this paper?

I'm reading Model selection and inference: Facts and fiction by Leeb & Pötscher (2005) (link), in this paper they look at an example in linear regression:

This is a traditional pretest procedure based on the likelihood ratio, but it is worth noting that in the simple example discussed here it coincides exactly with Akaike's minimum AIC rule in the case $c=\sqrt{2}$ and Schwarz's minimum BIC rule if $c=\sqrt{\ln n}$

Can anyone point to the connection between the statement and the definition?

I've looked at your answers but I don't follow yet. I'll try to explain the problem further.

Now, in the present linear regression framework, the absolute value of the $t$-statistic $$|t|=\left| \dfrac{\sqrt{n}\hat\beta(U) }{\sigma_\beta} \right|$$ is simply the positive square root of the LR-statistic.

(Actually, this in general only holds asymptotically, as we have $t^2=F$, the $F$- or Wald-statistic, which is in general not numerically identical to $\cal{LR}$ in finite samples. Leeb and Pötscher however assume that $\sigma^2$ is known, which, as is shown here, restores exact numerical equivalence of Wald, LR and score statistics in this setup.)

Hence, going with the larger model according to the mininum AIC rule when $\mathcal{LR}>2=c$ corresponds to rejecting when the t-statistic exceeds $\sqrt{c}$.

It is worth pointing out that this implies that, in this case, the AIC rule is nothing but a hypothesis test at level $\alpha=0.157$, as (the LR statistic being $\chi^2_1$ under the present $H_0$ of the smaller model being the correct one)

It does not seem to be a general result that AIC corresponds to a liberal nested hypothesis test. For example, when $K_2=8$, AIC is equivalent to rejecting when $\mathcal{LR}>16$, which, under the null, has probability

In fact, the probability tends to zero with $K_2$: 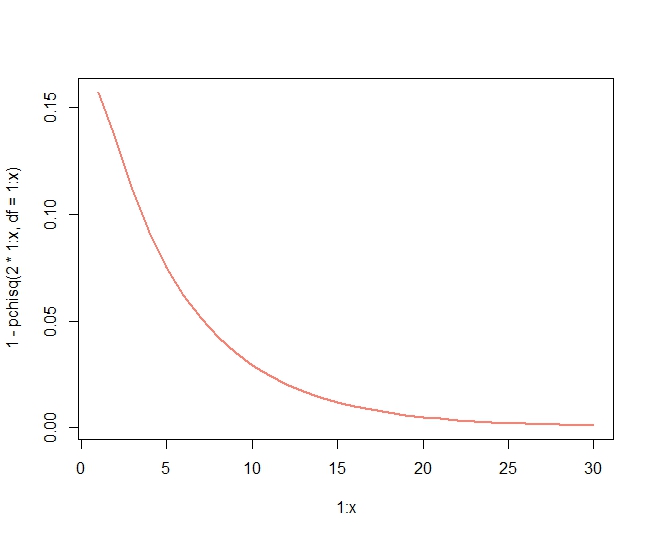 Not the answer you're looking for? Browse other questions tagged regression model-selection aic likelihood-ratio bic or ask your own question.

10
Why information criterion (not adjusted $R^2$) are used to select appropriate lag order in time series model?
8
Can BIC be Used for Hypothesis Testing
5
Exact equivalence of LR and Wald in linear regression under known error variance