I want to perform linear regression on some data. For every value of x, the data values are distributed normally across y, around some mean. However, the variance increases linearly as x increases. I made this example graph: 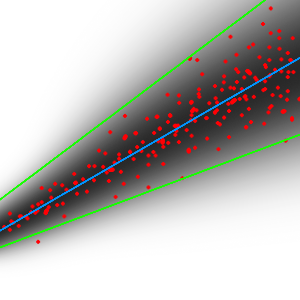 Blue is the regression line, red are data points, black shows the normal distribution, and green visualizes the variance increasing.

I haven't studied stats rigorously, so any simple explanations or resources I could look at further would be appreciated.

The original dataset follows $y = a/x + b$. The variance as $x$ changes follows a similar model $s^2 = c/x + d$. I transformed the data using $x' = 1/x$ to make the data linear (just to simplify the problem). Here is a sample graph (left is transformed, right is original): 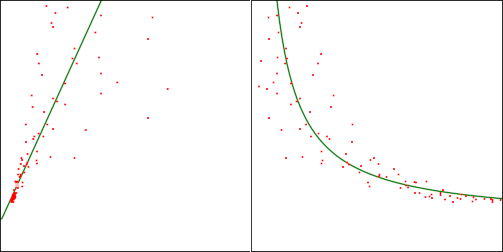 There are two issues:

The most straightforward thing to do is run a regular regression but use heteroscedastic robust standard errors. As @Glen_b suggests in the comments though, you probably can do better than this by efficiently exploiting known structure on your problem.

What estimator to use?

Machine learning guy here -- as much as I love the stats folks ML usually wins the day in real-world applications, and heteroscedasticity is one such common occurrence. A more general solution that is non-parametric and works for this and other (even highly) nonlinear regression problems is to just use quantile regression with a bagged decision tree. You can follow some links at Matlab to learn more (their examples are easily transferable to Python or R).

0
Using inverse of cube In linear model
4
What type of Generalized Linear Model can handle high-to-low-variance heteroscedasticity?
16
Why does linear regression use a cost function based on the vertical distance between the hypothesis and the input data point?
2
Finding correlation between two percentages
8
Hacking linear regression