Why I am getting different predictions for manual polynomial expansion and using the R `poly` function?

Why I am getting different predictions for manual polynomial expansion and using the R poly function? 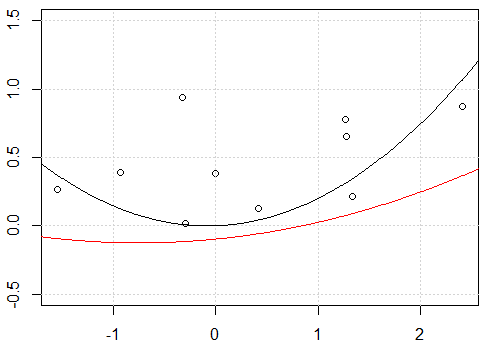 As you correctly note the original difference is because in the first case you use the "raw" polynomials while in the second case you use the orthogonal polynomials. Therefore if the later lm call was altered into: fit3<-lm(y~ poly(x,degree=2, raw = TRUE) -1) we would get the same results between fit and fit3. The reason why we get the same results in this case is "trivial"; we fit the exact same model as we fitted with fit<-lm(y~.-1,data=x_exp), no surprises there.

What is more interesting is why you will get the same plots when using an intercept. The first thing to notice is that, when fitting a model with an intercept

We can easily see that by simply appending the following fits on the existing plot. 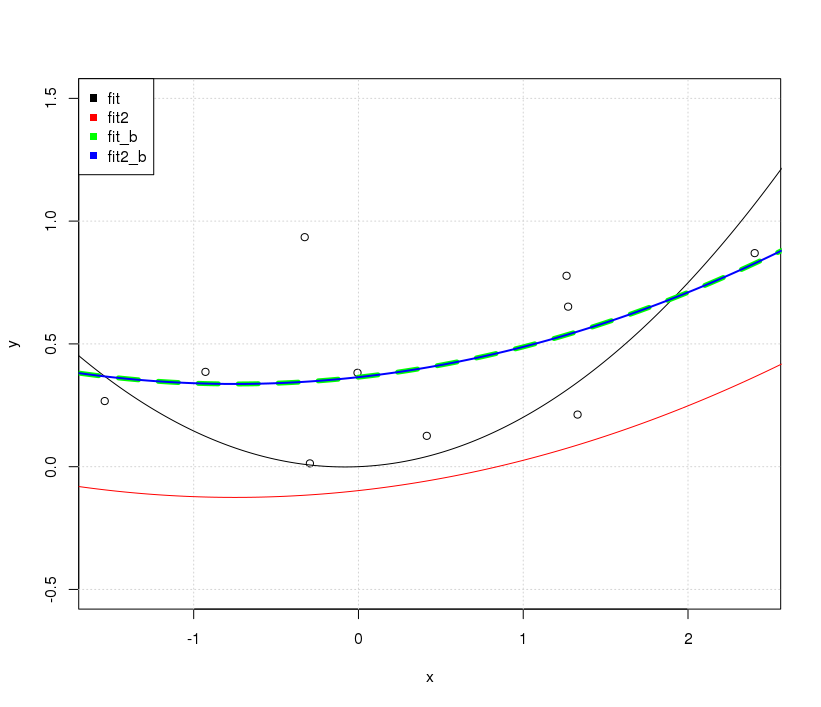 OK... Why were the no-intercept fits different while the intercept-including fits are the same? The catch is once again on the orthogonality condition.

As such in the case of fit when we expand it to include an intercept in fit_b we changed the off-diagonal entries of the Gram matrix $X^TX$ and thus the resulting fit is different as a whole (different curvature, intercept, etc.) in comparison with the fit provided by fit. In the case of fit2 though when we expand it to include an intercept as in fit2_b we only append a column that is already orthogonal to the columns we had, the orthogonality is against the constant polynomial of degree 0. This simply results on vertically moving our fitted line by the intercept. This is why the plots are different.

Not the answer you're looking for? Browse other questions tagged r regression polynomial or ask your own question.

0
How to correctly predict from orthogonalized covariates on new data in polynomial regression?
1
Need help with Feature Engineering

12
Why do I get wildly different results for poly(raw=T) vs. poly()?
4
R polynomial expansion error on “unique points” and degree
1
In Bishop's textbook, is the example of overfitting exaggerated?
0
Are the following is a good wrap of a comparison between all linear regression types (single, multiple and polynomial)?
0
How do I predict x values with confidence intervals from non-linear polynomial fit in R?