I am have been wondering why people use Gaussian processes (GP) to model an unknown (sometimes deterministic) function. For instance consider an unknown function $y=f(x)$. We have three independent observations from this function : $$\big(x_1,y_1); \big(x_2,y_2); \big(x_3,y_3) $$

The observations $\big(x_i,y_i)$ are independent. Their only commonality is that they come from the same underlying function.

I am not sure what aspect I am missing in this problem and why is forcing correlation helping.

Choosing a kernel is equivalent to choosing a class of functions from which you will choose your model. If choosing a kernel feels like a big thing that encodes a lot of assumptions, that's because it is! People new to the field often don't think much about the choice of kernel and just go with the Gaussian kernel even if it's not appropriate.

How do we decide whether or not a kernel seems appropriate? We need to think about what the functions in the corresponding function space look like. The Gaussian kernel corresponds to very smooth functions, and when that kernel is chosen the assumption is being made that smooth functions will provide a decent model. That's not always the case, and there are tons of other kernels that encode different assumptions about what you want your function class to look like. There are kernels for modeling periodic functions, non-stationary kernels, and a whole host of other things. For example, the smoothness assumption encoded by the Gaussian kernel is not appropriate for text classification, as shown by Charles Martin in his blog here.

Let's look at examples of functions from spaces corresponding to two different kernels. The first will be the Gaussian kernel $k_1(x, x') = \exp(-\gamma |x - x'|^2)$ and the other will be the Brownian motion kernel $k_2(x, x') = \min \{x, x'\}$. A single random draw from each space looks like the following: 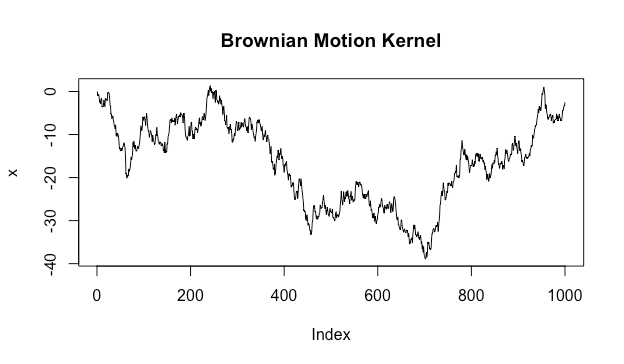 Clearly these represent very different assumptions about what a good model is.

But in general this correlation between nearby points is an extremely useful and powerful model. Imagine that you own a oil drilling company and you want to find new oil reserves. It's extremely expensive to drill so you want to drill as few times as possible. Let's say we've drilled $n=5$ holes and we want to know where our next hole should be. We can imagine that the amount of oil in the earth's crust is smoothly varying, so we will model the amount of oil in the entire area that we're considering drilling in with a Gaussian process using the Gaussian kernel, which is how we're saying that really close places will have really similar amounts of oil, and really far apart places are effectively independent. The Gaussian kernel is also stationary, which is reasonable in this case: stationarity says that the correlation between two points only depends on the distance between them. We can then use our model to predict where we should next drill. We've just done a single step in a Bayesian optimization, and I find this to be a very good way to intuitively appreciate why we like the correlation aspect of GPs.

Another good resource is Jones et al. (1998). They don't call their model a Gaussian process, but it is. This paper gives a very good feel for why we want to use the correlation between nearby points even in a deterministic setting.

One final point: I don't think anyone ever assumes that we can get good prediction results. That's something we'd want to verify, such as by cross validation.

If they were correlated then knowing that $Y_2$ is above its mean would tell us something about $Y_1$.

If $x_i$ and $x_l$ are similar to each other, i.e. $k(x_i, x_l)$ is large, then $y_i$ and $y_l$ should likely be similar to each other as well. Therefore, closeness in the input space (of the function to be approximated) results in the closeness in the output space. This is reasonable assumptions for many applications. For example, if two students have similar high school GPA, they are expected to perform similarly in the SAT exam as well.

Not the answer you're looking for? Browse other questions tagged machine-learning correlation covariance gaussian-process or ask your own question.

2
Gaussian Process Regression with positive prediction weights
4
A question about Dynamic Random Forest
0
how to implement law of total covariance
1
Predicting multiple output variables based on multiple input variables
2
A bunch of questions about Kernels in Machine Learning
2
what is instance weight in boosting?
0
Covariance between the linear combination of lognormal random variables