How do I fix the problem of having "expected count less than 5" warning message? (chi-square)

I know theres a similar answered question to mine on this forum but I would like to ask a new question for my specific case and would also like to ask further questions for some of the answers that were given there as well.

I have just received the results from a quesionnaire I did where some of the questions were in likert scale, 1 (Strongly agree) to 5 (Strongly disagree). When I tried doing a chi-square test for independence for two question responses, I got the below results and warning message about expected counts being less than 5 for some cells. I've asked in another place about this and one person said to combine columns or eliminate respondents but I really don't want to remove or alter my data. Is there a way of fixing this problem without changing data too much that it'll affect the results?

Also in the other post that I earlier mentioned, someone commented that the chi-square test is "poorly disposed to handling varying numbers of categories within a single test". Is that the case with me? If, so what test should I use?

Further background: For my research, one of the thing I want to do is to compare the relationship between different variables such as recycling attitude and recycling behavior. 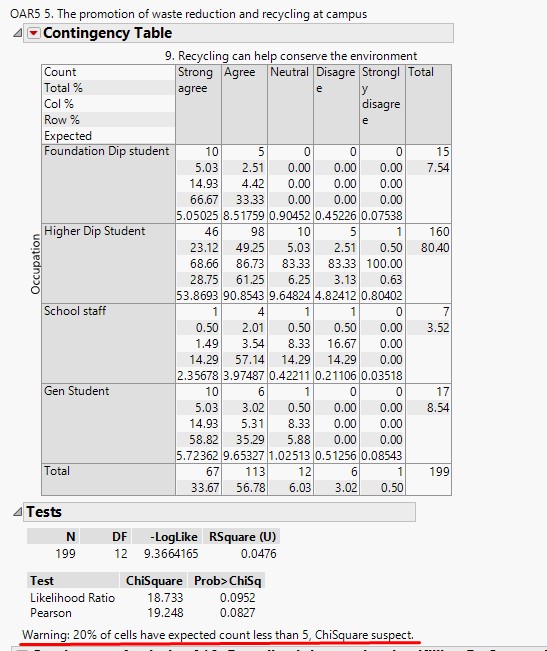 chi-squared-test expected-value
Share
Improve this question
asked May 7 '17 at 14:23

Browse other questions tagged chi-squared-test expected-value or ask your own question.

7
What to do when I have expected count <5 warning for a chi squared test?
2
Will there be a difference in my results if I set my data as nominal rather ordinal (using likert scale variables)
1
What test do I use for two variables that are ordinal and seem to have a non monotonic relationship?

3
How to determine if two survey questions are independent?
1
Chi-square test problem (and some more maybe)
7
What to do when I have expected count <5 warning for a chi squared test?
0
Chi-Square test for finding the difference?
0
What should I do with chi-square expected values below in this large table?
5
Why is the chi-square test more popular than the G-test?