How can it be trapped in a saddle point?

I am currently a bit puzzled by how mini-batch gradient descent can be trapped in a saddle point.

The solution might be too trivial that I don't get it.

You get an new sample every epoch, and it computes a new error based on a new batch, so the cost function is only static for each batch, which means that the gradient also should change for each mini batch.. but according to this should a vanilla implementation have issues with saddle points?

Another key challenge of minimizing highly non-convex error functions common for neural networks is avoiding getting trapped in their numerous suboptimal local minima. Dauphin et al. [19] argue that the difficulty arises in fact not from local minima but from saddle points, i.e. points where one dimension slopes up and another slopes down. These saddle points are usually surrounded by a plateau of the same error, which makes it notoriously hard for SGD to escape, as the gradient is close to zero in all dimensions.

I would mean that especially SGD would have clear advantage against saddle points, as it fluctuates towards its convergence... The fluctuations and the random sampling , and cost function being different for each epoch should be enough reasons for not becoming trapped in one.

For full batch gradient decent does it make sense that it can be trapped in saddle point, as the error function is constant.

I am a bit confused on the two other parts.

gradient-descent sgd
Share
Improve this question
edited May 11 '17 at 12:50

Take a look at the image below from Off Convex. In a convex function (leftmost image), there is only one local minimum, which is also the global minimum. But in a non-convex function (rightmost image), there may be multiple local minima and often joining two local minima is a saddle point. If you are approaching from a higher point, the gradient is comparatively flatter, and you risk getting stuck there, especially if you are moving only in one direction.

Now the thing is, whether you are optimizing using mini-batch or stochastic gradient descent, the underlying non-convex function is the same, and the gradient is a property of the this function. When doing mini-batch, you consider many samples at a time and take the gradient step averaged over all of them. This reduces variance. But if the average gradient direction is still pointing in the same direction as the saddle point, then you still risk getting stuck there. The analogy is, if you're taking 2 steps forward and 1 step back, averaging over those, you ultimately end up taking 1 step forward. If you perform SGD instead, you take all the steps one after the other, but if you're still moving in a single direction, you can reach the saddle point and find that the gradient on all sides is fairly flat and the step size is too small to go over this flat part. This doesn't have anything to do with whether you considered a bunch of points at once, or one by one in random order.

Take a look at the visualization here. Even with SGD, if the fluctuations occur only along one dimension, with the steps getting smaller and smaller, it would converge at the saddle point. In this case, the mini-batch method would just reduce the amount of fluctuation but would not be able to change the gradient's direction.

SGD can sometimes break out of simple saddle points, if the fluctuations are along other directions, and if the step size is large enough for it to go over the flatness. But sometimes the saddle regions can be fairly complex, such as in the image below.

The way methods like momentum, ADAGRAD, Adam etc are able to break out of this, is by considering the past gradients. Consider momentum,

which adds a portion of the last gradient, $v_{t-1}$. In case you've just been going back and forth in one direction, essentially changing signs, it ends up dampening your progress. While if there has consistently been positive progress in one direction, it ends up building up and going down that way.

[1] has shown that gradient descent with random initialization and appropriate constant step size does not converge to a saddle point. It is a long discussion but to give you an idea of why see the following example: 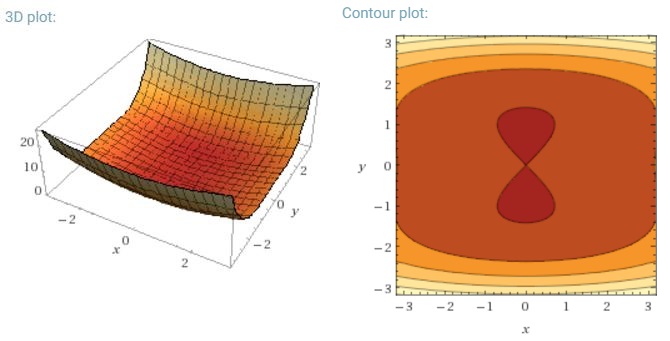 If you go to the referenced paper (they also emperically show how their saddle-free approach does indeed improve upon mini-batch SGD) they state:

A step of the gradient descent method always points in the right direction close to a saddle point...and so small steps are taken in directions corresponding to eigenvalues of small absolute value.

They also note the presence of "plateaus" near saddle points (in other words, the saddle is not steep) - in these cases, taking too small steps would indeed result in premature convergence before having escaped the saddle region. Since this is a non-convex optimization, the convergence of the learning rate would make this worse.

It does seem possible that one could try an iterative approach, where one restarts the mini-batch SGD once it completes (i.e., resetting the learning rate) to see if one can escape the problematic region.

I think the problem is that while approaching a saddle point you enter a plateau, i.e. an area with low (in absolute value) gradients. Especially when you're approaching from the ridge. So your algorithm decreases the step size. With a decreased step size now all gradients (in all directions) are small in absolute value. So the algorithm stops, thinking it's at the minimum.

Not the answer you're looking for? Browse other questions tagged gradient-descent sgd or ask your own question.

5
Why doesn't gradient descent terminate on saddle point?
2
Why does momentum escape from a saddle point in this famous image?
1
does cost function of one hidden layer perception have only one global minimal

0
Error Surface / Cost Surface topology: gradient descent on saddle points vs. local minima
1
Does memory ever really matter for mini-batch size selection?
12
How to set mini-batch size in SGD in keras
3
Parallel minibatch gradient descent algorithms
3
Why do saddle points become “attractive” in Newtonian dynamics?
1
Saddle-free Newton method for SGD - while Newton attracts saddles, is it worth to actively replel them?