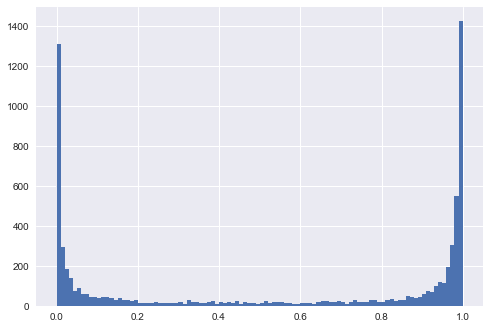 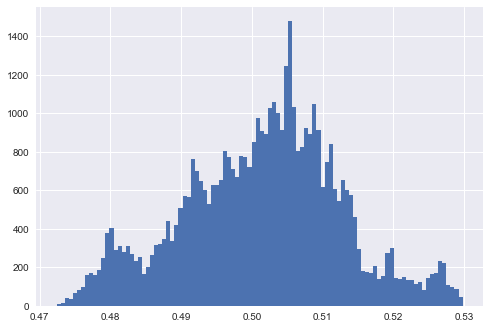 So, in one case, predictions (on out-of-sample / validation sets) are mostly extreme (close to 0 and 1), and in the other case predictions are close to 0.5.

What, if anything, can be inferred from each graph? How could one explain the difference? Can anything be said about the dataset/features/model?

I have prepared a short script to show what I think should be the right intuition.

What the script does:

The produced chart shows how the generated data in each of the scenario looks like and it shows the distribution of the predicted values. The interpretation: lack of separability translates in predicted $y$ being at or right around 0.5.

All this shows the intuition, I guess it should not be hard to prove this in a more formal fashion although I would start from a logistic regression - that would make the math definitely easier. 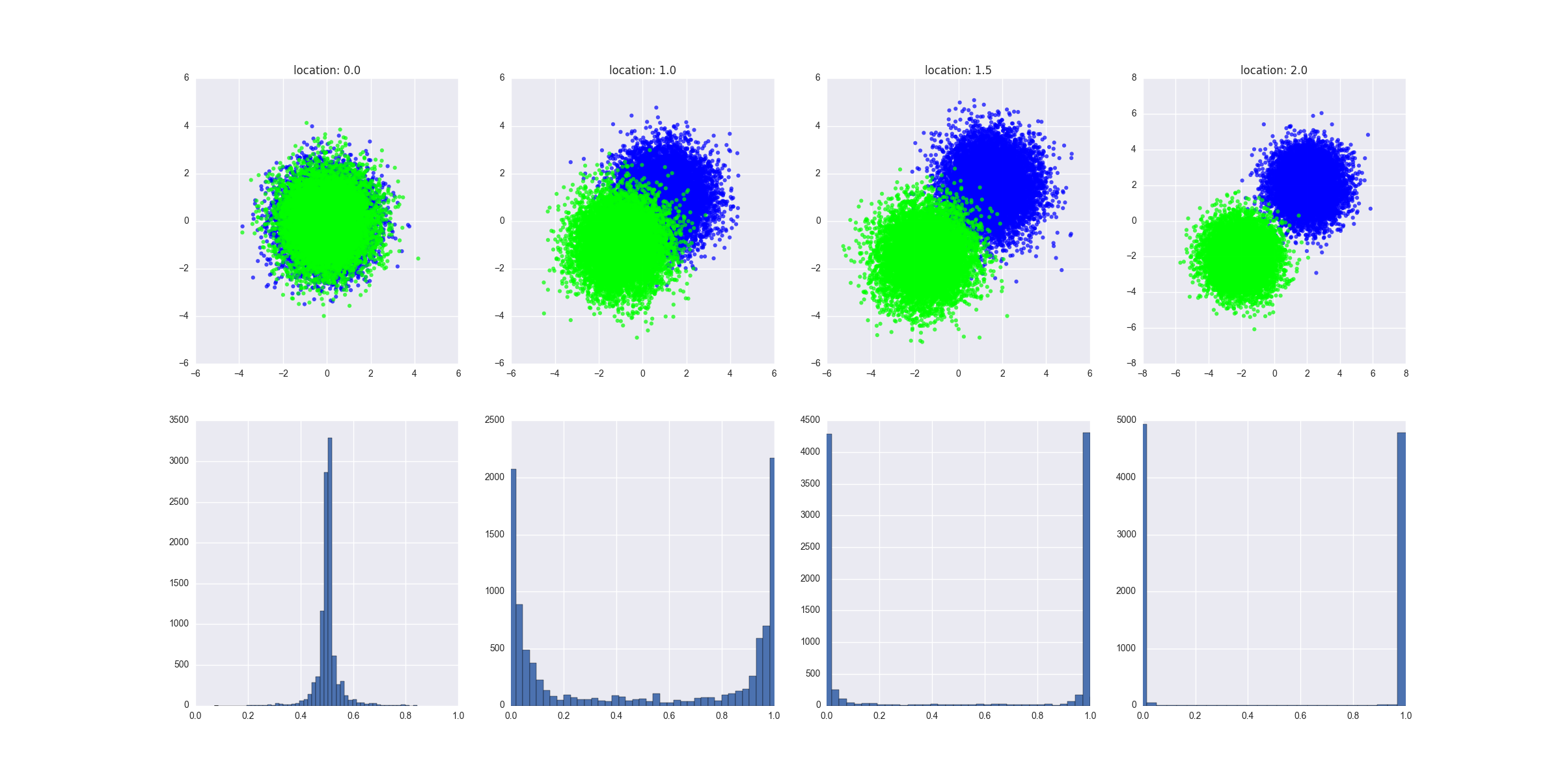 I am guessing in the leftmost example, where the two classes are not separable, if you set the parameters of the model to overfit the data (e.g. deep trees, large number of trees and features, relatively high learning rate), you would still get the model to predict extreme outcomes, right? In other words, the distribution of predictions is indicative of how closely the model ended up fitting the data?

Let's assume that we have a super deep tree decision tree. In this scenario, we would see the distribution of prediction values peak at 0 and 1. We would also see a low training error. We can make the training error arbitrary small, we could have that deep tree overfit to the point where each leaf of the tree correspond to one datapoint in the train set, and each datapoint in the train set corresponds to a leaf in the tree. It would be the poor performance on the test set of a model very accurate on the training set a clear sign of overfitting. Note that in my chart I do present the predictions on the test set, they are much more informative.

One additional note: let's work with the leftmost example. Let's train the model on all class A datapoints in the top half of the circle and on all class B datapoints in the bottom half of the circle. We would have a model very accurate, with a distribution of prediction values peaking at 0 and 1. The predictions on the test set (all class A points in the bottom half circle, and class B points in the top half circle) would be also peaking at 0 and 1 - but they would be entirely incorrect. This is some nasty "adversarial" training strategy. Nevertheless, in summary: the distribution sheds like on the degree of separability, but it is not really what matters.

First I would suggest to use one data set instead of two to explore the output probability predictions. The reason is simple: if we change the data no one knows what will happen. As demoed in @IcannotFixThis's answer the exact same model will have different probability output, if the data changes from overlapping to more separable.

If we insist to talk on two different data set, from the limited information, we can only say it is possible that "extreme predictions" means the model is overfitting / the the data is too "simple" for the model

The predictions usually depend on your model. Decision trees in general yield quite "calibrated" outputs which can nearly be interpreted as a probability. Some like SVM for example, don't. But this also highly depends on over-fitting/under-fitting. Or on the number of features (no, it does not have to be "better" necessarily). Actually, if this is one class, the first one probably over-fitted.

But first things first: where is your other class? As your doing predictions, you should always plot both classes (with different colours). From the predictions of one class, you cannot say too much.

If you want to measure the performance and to make conclusions about how much is learned from the features, use a score like ROC AUC where the order of events matters and not the distribution. If you intend to work with distributions, you may have a look at probability calibration methods (or read which classifiers yield good calibrations anyway). They are not perfect but aim at transforming the predictions into probabilities (and therefore give a meaning to the output).

The first scenario may be due to over fitting of the training data. In-sample and out of sample performance also depends on what evaluation metric you are using (or is applicable to the problem). Besides comparing the metrics, try checking the confusion matrices as well to check the misclassifications.

Not the answer you're looking for? Browse other questions tagged classification cart boosting or ask your own question.