I want to use deep learning techniques to perform better inference tasks than Hidden Markov Models (which is a shallow model)? I was wondering what is the state-of-the art deep learning model to replace Hidden Markov Models (HMM)? The set-up is semi-supervised. The training data X(t),Y(t) is a time series, with significant temporal correlations. Also, there is a huge amount of unlabelled data, i.e., simply X(t) and no Y(t). After reading many papers, I narrowed down on the following model -> Conditionally Restricted Boltzmann Machines (Ilya Sustkever MS thesis) and use Deep Belief Networks for unsupervised pretraining (or use variational autoencoders for pretraining). I am very new to the field, and was wondering if these techniques are outdated.

In addition to the various RNNs mentioned in the comments, another type of layer that can be used when both the input and the output is a sequence is the following CRF-style layer (gave state-of-the-art results for named-entity recognition as in the paper mentioned below, as well as sequential short-text classification). I have only used it for fully supervised tasks though.

https://arxiv.org/abs/1606.03475 (De-identification of Patient Notes with Recurrent Neural Networks) uses a neural network with a "label sequence optimization layer" as the top layer to do some sequence tagging, which could be seen as a "deep learning" equivalent to CRF.

The label sequence optimization layer takes the sequence of probability vectors $\mathbf{a}_{1:n}$ from the label prediction layer as input, and outputs a sequence of labels $y_{1:n}$, where $y_{i}$ is the label assigned to the token $x_{i}$.

The simplest strategy to select the label $y_{i}$ would be to choose the label that has the highest probability in $\mathbf{a}_{i}$, i.e. $y_{i}=\text{argmax}_{k}{\mathbf{a}_{i}[k]}$. However, this greedy approach fails to take into account the dependencies between subsequent labels. For example, it may be more likely to have a token with the PHI type STATE followed by a token with the PHI type ZIP than any other PHI type. Even though the label prediction layer has the capacity to capture such dependencies to a certain degree, it may be preferable to allow the model to directly learn these dependencies in the last layer of the model.

One way to model such dependencies is to incorporate a matrix $T$ that contains the transition probabilities between two subsequent labels. $T[i,j]$ is the probability that a token with label $i$ is followed by a token with the label $j$. The score of a label sequence $y_{1:n}$ is defined as the sum of the probabilities of individual labels and the transition probabilities: $$ s(y_{1:n}) = { \sum_{i=1}^{n} > \mathbf{a}_{i}[y_{i}]+ \sum_{i=2}^{n} T [y_{i-1},y_{i}} ]. $$ These scores can be turned into probabilities of the label sequences by taking a softmax function over all possible label sequences. During the training phase, the objective is to maximize the log probability of the gold label sequence. In the testing phase, given an input sequence of tokens, the corresponding sequence of predicted labels is chosen as the one that maximizes the score. 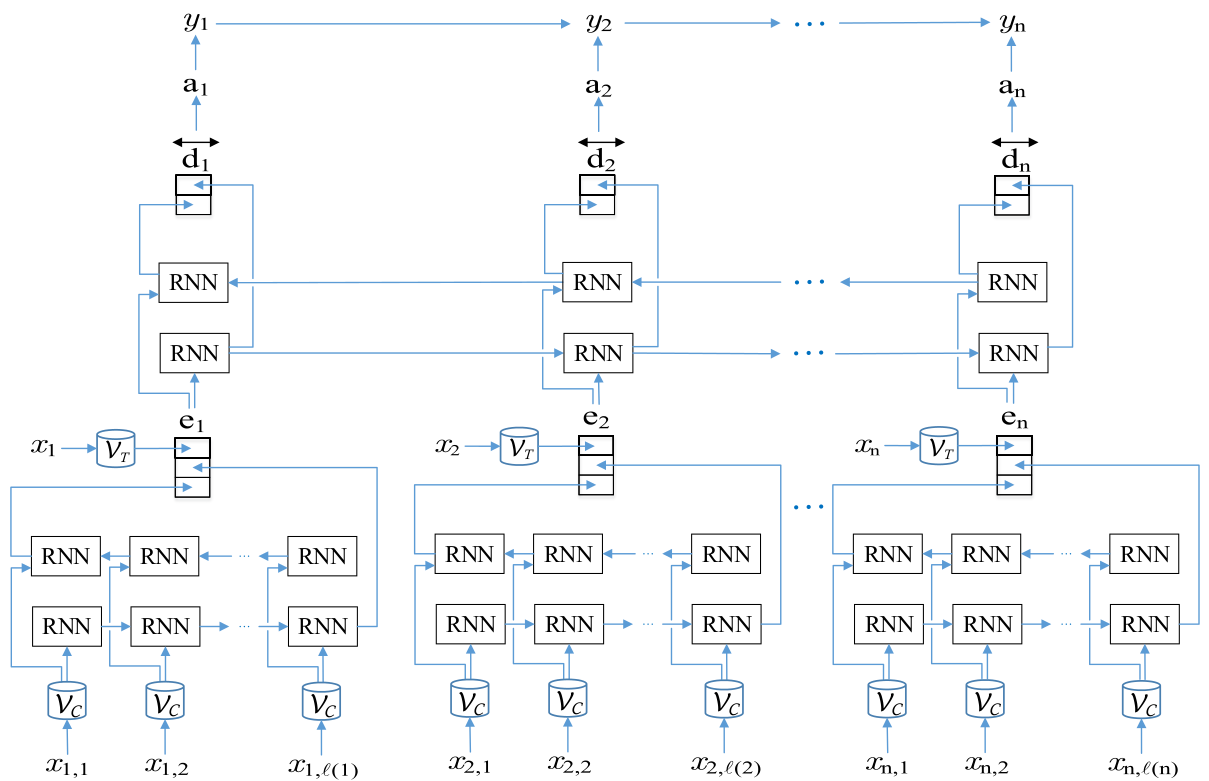 Not the answer you're looking for? Browse other questions tagged machine-learning deep-learning hidden-markov-model artificial-intelligence deep-belief-networks or ask your own question.