Zero inflated distributions, what are they really?

I am struggling to understand zero inflated distributions. What are they? What's the point?

Then somebody told me "hey, use a zero inflated distribution", but looking it up, it does not seem to do anything differently than what I suggested above? It has a regular parameter $\mu$, and then another parameter $p$ to model the probability of zero? It just does both things at the same time no?

The difference between the procedure you described and an "all-in-one" zero-inflated model is error propagation. Like all other two-step procedures in statistics, the overall uncertainty of your predictions in step 2 won't take into account the uncertainty as to whether the prediction should be 0 or not.

Sometimes this is a necessary evil. Fortunately, it's not necessary in this case. In R, you can use pscl::hurdle() or fitdistrplus::fitdist().

The basic idea you describe is a valid approach and it is often called a hurdle model (or two-part model) rather than a zero-inflated model.

However, it is crucial that the model for the non-zero data accounts for having the zeros removed. If you fit a Poisson model to the data without zeros this will almost certainly produce a poor fit because the Poisson distribution always has a positive probability for zero. The natural alternative is to use a zero-truncated Poisson distribution which is the classic approach to hurdle regression for count data.

For a discussion of both hurdle and zero-inflation models for count data in R, see our manuscript published in JSS and also shipped as a vignette to the pscl package: http://dx.doi.org/10.18637/jss.v027.i08

What ssdecontrol said is very correct. But I'd like to add a few cents to the discussion.

I just watched the lecture on Zero Inflated models for count data by Richard McElreath on YouTube.

It makes sense to estimate p while controlling for the variables that are explaining the rate of the pure Poisson model, specially if you consider that the chance of an observed zero being originated from the Poisson distribution is not 100% . 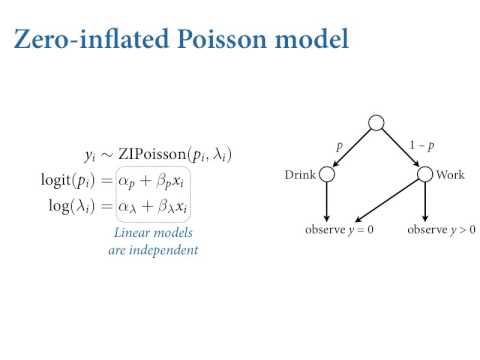 It also makes sense when you consider the parameters of the model, since you end up with two variables to estimate, p and the rate of the Poisson model, and two equations, the case when count is zero and case when the count is different from zero.

Image source : Statistical Rethinking - A Bayesian Course with Examples in R and Stan by Richard McElreath

Not the answer you're looking for? Browse other questions tagged zero-inflation or ask your own question.

12
Fitting a model to a variable with many zeros and few but large values in right tail
-1
How to tackle datasets where the dependent variables has around 80% 1's?