Interpretation of Fixed Interaction Effects in a Linear Mixed Model

I have a linear mixed model for predicting speed of a street crossing by a pedestrian with the factors VS (vehicle speed), GAP (selected time gap size for crossing), the interaction factors VSxGAP and a random intercept.

How can I interpret parameter estimates for the interaction effects? 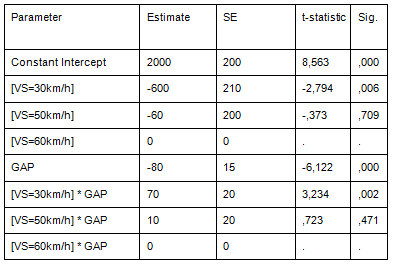 I only have a random effect of the intercept - is it still correct to interpret the interaction effects as follows?:

And is it correct to imagine the plots for each VS to have different slopes due to the interaction effect!?
The fact that I have not determined any random effects, except for the intercept, confuses me a lot with the interpretation of the estimates - so I would be very thankful for responses.

Generally, the explanation of fixed effect are the same regardless having or not having random effect in the model.

You do not need to imagine, you should draw that three straight lines with different slops and intercepts. From this graph, you will understand these thing very clearly.

From your description, I cannot make the judgement that random intercepts should be included in the model or not.

Not the answer you're looking for? Browse other questions tagged mixed-model interpretation random-effects-model fixed-effects-model or ask your own question.