You believe that the mean electricity usage is about twice as much for houses as for apartments or condominiums, and that the standard deviation is proportional to the mean so that S1 = 2S2 = 2S3. How would you allocate a stratified sample of 900 observations if you wanted to estimate the mean electricity consumption for all households in the city?

Because you have no evident need to make the proportions in the sample similar to those in the population, this is an optimal allocation problem: that is, it focuses on sampling to produce the smallest possible expected standard error of estimate.

So, although we don't know $s^2$ during this planning stage, we can still express the eventual margin of error as a multiple of $s^2$ by plugging in these values for the $s_h^2$ in the previous formula and dividing both sides by $s^2,$ giving

In these terms your objective can be framed as a constrained optimization problem:

Let's draw some useful conclusions from this:

(Rounding caused this allocation to sum only to $899.$ Assign the leftover subject to, say, the smallest sample if you like.)

What happens if we don't specify an optimal design? The figure plots what happens to the square of the standard error when we take $dn$ observations out of one stratum's sample and allocate them to another stratum. There are three possible ways to do this, distinguished by colors in the graphs: 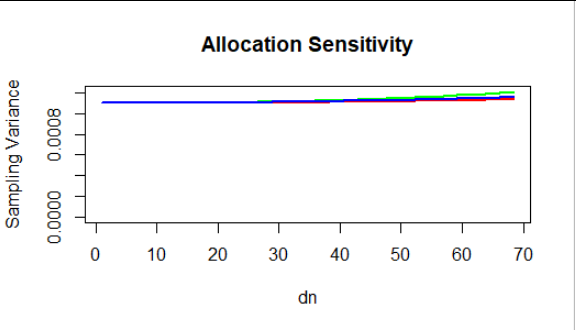 Even when mis-allocating $70$ observations (which is half the size of the sample of houses), the sampling variance barely changes in this example.

In general, this phenomenon of robustness to sample design occurs in relatively large surveys. That's why we needn't fuss about the rounding issue, nor even worry too much about whether our guesses about the strata standard deviations (or even the stratum sizes in the population) are absolutely correct: we just have to get reasonably close.

Kevin, for example for the optimun allocation:

Not the answer you're looking for? Browse other questions tagged sampling stratification or ask your own question.