I have written a program which generates random data. If the program is working correctly, that data should follow a specific, known probability distribution. I would like to run the program, do some calculations on the result, and come up with a p-value.

Before anybody else says it: I understand that hypothesis testing cannot detect when the program is operating correctly. It can only detect when it is operating incorrectly in a specific way. (And even then, the test "should" fail X% of the time, depending on what significance level you choose...)

So, I am trying to gain an understanding of what tools might be appropriate. In particular:

What I know so far:

Ultimately, all of these tests presumably detect "different ways" of deviating from the specified null distribution. But I don't really know what the differences are yet... In summary, I'm looking for some kind of general description of where each type of test is most applicable, and what sorts of problems it detects best.

Here is a general description of how the 3 methods mentioned work.

The Chi-Squared method works by comparing the number of observations in a bin to the number expected to be in the bin based on the distribution. For discrete distributions the bins are usually the discrete possibilities or combinations of those. For continuous distributions you can choose cut points to create the bins. Many functions that implement this will automatically create the bins, but you should be able to create your own bins if you want to compare in specific areas. The disadvantage of this method is that differences between the theoretical distribution and the empirical data that still put the values in the same bin will not be detected, an example would be rounding, if theoretically the numbers between 2 and 3 should be spread througout the range (we expect to see values like 2.34296), but in practice all those values are rounded to 2 or 3 (we don't even see a 2.5) and our bin includes the range from 2 to 3 inclusive, then the count in the bin will be similar to the theoretical prediction (this can be good or bad), if you want to detect this rounding you can just manually choose the bins to capture this.

The KS test statistic is the maximum distance between the 2 Cumulative Distribution Functions being compared (often a theoretical and an empirical). If the 2 probability distributions only have 1 intersection point then 1 minus the maximum distance is the area of overlap between the 2 probability distributions (this helps some people visualize what is being measured). Think of plotting on the same plot the theoretical distribution function and the EDF then measure the distance between the 2 "curves", the largest difference is the test statistic and it is compared against the distribution of values for this when the null is true. This captures differences is shape of the distribution or 1 distribution shifted or stretched compared to the other. It does not have a lot of power based on single outliers (if you take the maximum or minimum in the data and send it to Infinity or Negative Infinity then the maximum effect it will have on the test stat is $\frac1n$. This test depends on you knowing the parameters of the reference distribution rather than estimating them from the data (your situation seems fine here). If you estimate the parameters from the same data then you can still get a valid test by comparing to your own simulations rather than the standard reference distribution.

The Anderson-Darling test also uses the difference between the CDF curves like the KS test, but rather than using the maximum difference it uses a function of the total area between the 2 curves (it actually squares the differences, weights them so the tails have more influence, then integrates over the domain of the distributions). This gives more weight to outliers than KS and also gives more weight if there are several small differences (compared to 1 big difference that KS would emphasize). This may end up overpowering the test to find differences that you would consider unimportant (mild rounding, etc.). Like the KS test this assumes that you did not estimate parameters from the data.

Here is a graph to show the general ideas of the last 2: 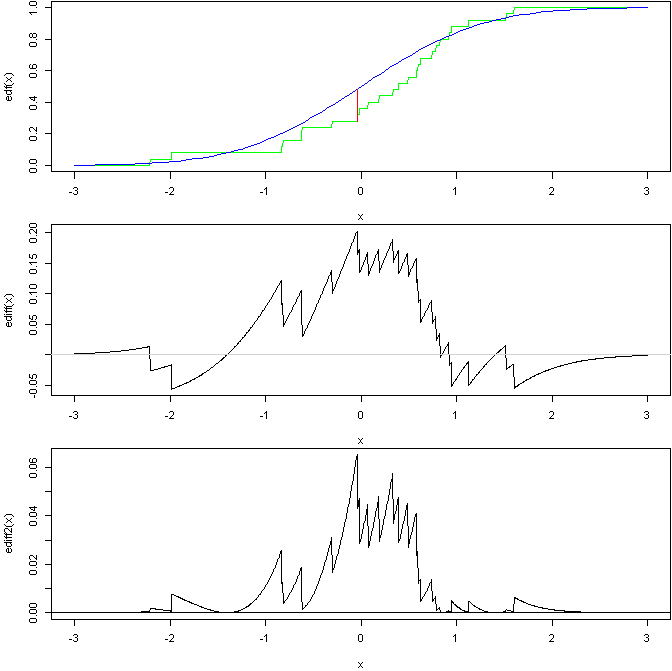 based on this R code:

The top graph shows an EDF of a sample from a standard normal compared to the CDF of the standard normal with a line showing the KS stat. The middle graph then shows the difference in the 2 curves (you can see where the KS stat occurs). The bottom is then the squared, weighted difference, the AD test is based on the area under this curve (assuming I got everything correct).

Other tests look at the correlation in a qqplot, look at the slope in the qqplot, compare the mean, var, and other stats based on the moments.

+1 for writing a clear and detailed question. I hope that my answer isn't too frustrating. I believe that hypothesis testing is not an appropriate approach in your case. Null hypothesis significance testing is a reasonable thing to do when the answer could be yes or no, but you don't know which. (Unfortunately, it doesn't actually tell you which, but this is a different issue.) In your case, I gather, you want to know if your algorithm is good. However, it is known (with certainty), that no computer program can generate truly random data from any probability distribution. This is true firstly, because all computers are finite state machines, and thus can only produce pseudorandom numbers. Furthermore (setting the lack of true randomness aside), it is not possible that the generated values perfectly follow any continuous distribution. There are several ways to understand this, but perhaps the easiest is that there will be 'gaps' in the number line, which is not true of any continuous random variable. Moreover, these gaps are not all perfectly equally wide or perfectly equally spaced. Among computer scientists who work on pseudorandom number generation, the name of the game is to improve the algorithms such that the gaps are smaller, more even, with longer periods (and also that can generate more values faster). At any rate, these facts establish that hypothesis testing is the wrong approach for determining if your algorithm is properly following "a specific, known probability distribution", because it isn't. (Sorry.)

Instead, a more appropriate framework is to determine how close your data are to the theoretical distribution. For this, I would recommend reconsidering plots, specifically qq-plots and pp-plots. (Again, I recognize that this must be frustrating, and I apologize for that.) However, you don't have to actually make the plots or look at them, as weird as that sounds. Instead, having converted your data appropriately for plotting, and having calculated the corresponding values from the theoretical distribution in question, you can correlate them. This gives you a number, specifically an r-score, just like you want. Moreover, the number gives you an appropriate measure of how good your algorithm is. For this process, you can generate as much data as you would like; more data will give you more precision with respect to the measurement. That is, we have shifted our conception of power from $1-\beta$, the probability of rejecting a truly false null (which is guaranteed), to the accuracy in parameter estimation perspective. Obviously, your goal here is to produce an algorithm that gets you as close to $r=1$ as possible. It may well be worthwhile to do this for both types of plots as they have different strengths and weaknesses (specifically, qq-plots give you better resolution in the tails of the distribution, whereas pp-plots afford better resolution in the center).

On one other note, with regard to evaluating the quality of your algorithm, you may want to time it relative to other standard pRNG's.

I haven't completely read all the answers but I do see they are pretty thorough and accurate. Running the risk that I am repeating something buried in the long answers I just want to say that v=the chi square test can be used for continuous data. It may not be the best test and like many tests it relies on asymptotic theory and so may not be accurate in small samples with sparse cells (this depends also on how you do the binning). Anderson-Darling is more powerful for testing normality than the K-S test but K-S may be better for other continuous distributions. Lillefors has a test that is designed for exponential distributions.

4
How to write program that takes a vector and a CDF and performs the Kolmogorov-Smirnov test?
6
Kolmogorov-Smirnov test strange output
1
Goodness of fit for long-tailed distributed data
0
Error metrics to assess a stochastic model with Monte Carlo simulations
1
Fitting measured, real-world data to theoretical distribution: How to test goodness?
1
Uniform distribution from secure random number generator?

4
Testing samples against a distribution
28
Distribution hypothesis testing - what is the point of doing it if you can't "accept" your null hypothesis?
4
Finding the best-fitting parametric distribution for empirical data
2
Characterizing the distribution of manufacturing data
3
Understanding how to apply goodness of fit tests when parameters of a continuous non-normal distribution have been fitted to the data
5
Check if data (N datapoints) originate from known distribution
1
Multi-variate two-sample ANDERSON-DARLING TEST
1
Statistical Test for Randomness