My lab uses what our PI calls "modified Bland–Altman plots" to analyze regression quality. I'd like to know what the generally used name is for these plots.

A Bland–Altman plot compares the difference between two measures to their average. The "modification" is that the x-axis is, instead of the average, the ground truth value. The y-axis is still the difference between the predicted and true values. In effect, the modified B–A plot can be seen as the plot of residuals from the line $y=x$—i.e. the line $predicted=truth$.

B–A plots are also called mean–difference plots, so these modified ones could be considered "truth–difference" plots, but that name is not present in literature.

Admittedly, this example has terrible bias in its prediction, shown by the deviation from the zero-line. 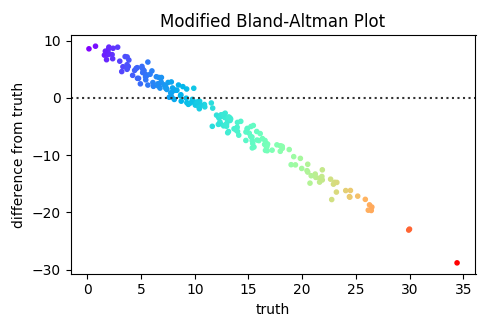 Returning to the question at hand: what is the accepted name for these plots?

On acceptance: Acceptance of names depends on who you want them to be accepted by. Bland-Altman plots are simply Tukey mean-difference plots (and Tukey was there much earlier), so if you want statisticians to accept the name you possibly wouldn't name it after Bland and Altman. On the other hand, in some application areas (medicine or chemistry, perhaps), you'd probably get quizzical looks if you called mean-difference plots anything but Bland-Altman. [However, chances are someone was there before Tukey as well, many of these ideas are quite old.]

On a suitable name: If those things you're calling "truth" are actually "truth" (not just observations with error, say), I'd probably just call what you have a residual plot (though it looks like those differences are negative residuals); depending on how your truth was obtained you might hyphenate in a descriptive noun after "residual" (e.g. if it was based on some gold-standard calibration you might call it a residual-standard plot).

If your truth is really truth (and not just observations or even some higher-quality estimate) then you could even argue that error should be used in place of residual.

On the suitability of the plot as a diagnostic: How were those "truth" values obtained? Are those just the actual data? If so "truth" is arguably a misnomer, and in that case you'd expect there to be some negative correlation in that plot; it wouldn't necessarily suggest a problem at all. We have many threads which explain (or even prove) that plots of $y-\hat{y}$ vs $y$ will have a positive correlation, if your "difference" axis is $\hat{y}-y$ then you'd expect a negative linear trend when the regression model was appropriate.

What is the aim of the plot? How are you interpreting it?

Here's a few of the existing posts relating to the issue of plotting residuals vs data:

Does it make sense to study plots of residuals with respect to the dependent variable?

What is the expected correlation between residual and the dependent variable?

Not the answer you're looking for? Browse other questions tagged data-visualization residuals bland-altman-plot or ask your own question.