I have two groups, transgenic and control mice, in which I take two measures at two different times. I want to see if there is an effect in the variable within-Subjects depending on the time and if this effect is different between my two groups (eg. the effect can be observed in the control group but not in the transgenic group).

I'm using repeated measures ANOVA in SPSS to analyse it, my within-subject factor is the day in which I take the measure and my between-subjects factor is the genotype (transgenic or control). Is this the right test for my experiment?

I have been looking at other questions but it isn't still clear to me, sorry if I'm repeating what has already been asked. Thanks in advance. 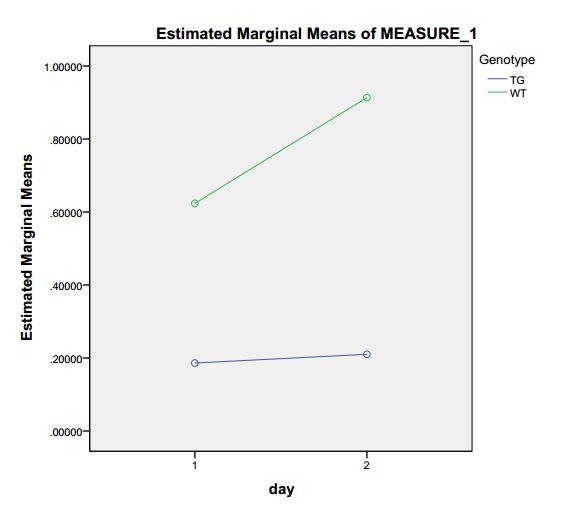 Regardless of whether your interaction were significant, testing simple effects (which you call post hoc tests) would not be relevant to whether the effect is different for the two groups. The interaction is a direct test of that and, if significant, no more would need to be done. If not significant, as in your data, then a finding of a significant difference for one group but not the other is not valid evidence that the effects are different. You could interpret your results as containing a slight hint of an interaction that could be explored in future research.

I would suggest that you graph your results by computing difference scores for each observation and then creating parallel box plots for the two groups. Then, the reason for the lack of significance woukd be evident.

Not the answer you're looking for? Browse other questions tagged anova spss repeated-measures post-hoc or ask your own question.