How does ACF & PACF identify the order of MA and AR terms?

It's been more than 2 years that I am working on different time series. I have read on many articles that ACF is used to identify order of MA term, and PACF for AR. There is a thumb rule that for MA, the lag where ACF shuts off suddenly is the order of MA and similarly for PACF and AR.

Here is one of the articles I followed from PennState Eberly College of Science.

My Question is why is it so? For me even ACF can give AR term. I need explanation of thumb rule mentioned above. I am not able to understand thumb rule intuitively/mathematically that why -

The quotes are from the link in the OP:

Identification of an AR model is often best done with the PACF.

This equation looks like a regression model, as indicated on the linked paged... So what is a possible intuition...

In Chinese whispers or the telephone game as illustrated here

This pattern repeats itself: there is a word shared at any given two consecutive time stamps, which goes away if $t_k$ is compared to $t_{k-2}.$

However, in this process of introducing errors at each step there is a similarity that spans further than just one single step: Although Chrisy's pool is different in meaning to CC is cool!, there is no denying their phonetic similarities or the rhyming of "pool" and "cool". Therefore it wouldn't be true that the correlation stops at $t_{k-1}.$ It does decay (exponentially) but it can be traced downstream for a long time: compare $t_5$ (Missi's cruel) to $t_0$ (CV is cool!) - there are still similarities.

Multiple, progressively offset sequences are correlated, discarding any contribution of the intermediate steps. This would be the graph of the operations involved:

In this setting the PACF is useful in showing that once the effect of $t_{k-1}$ is controlled for, older timestamps than $t_{k-1}$ do not explain any of the remaining variance: all that remains is white noise: 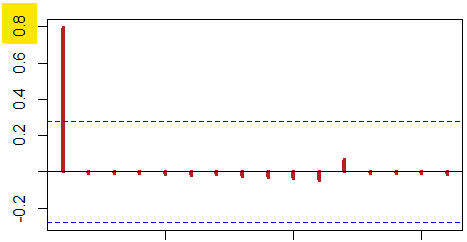 It is not difficult to come very close to the actual output of the R function by actually obtaining consecutive OLS regressions through the origin of farther lagged sequences, and collecting the coefficients into a vector. Schematically, 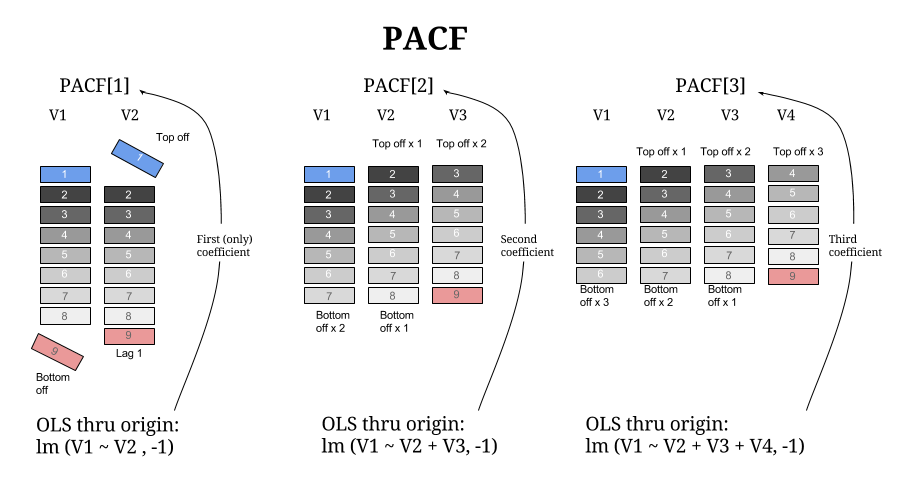 Identification of an MA model is often best done with the ACF rather than the PACF.

For an MA model, the theoretical PACF does not shut off, but instead tapers toward $0$ in some manner. A clearer pattern for an MA model is in the ACF. The ACF will have non-zero autocorrelations only at lags involved in the model.

A moving average term in a time series model is a past error (multiplied by a coefficient).

It turns out that the behavior of the ACF and the PACF are flipped compared to AR processes:

In the game above, $t_{k-1}$ was enough to explain all prior errors in transmitting the message (single significan bar in PACF plot), absorbing all prior errors, which had shaped the final message one error at a time. An alternative view of that AR($1$) process is as the addition of a long series of correlated mistakes (Koyck transformation), an MA($\infty$). Likewise, with some conditions, an MA($1$) process can be inverted into an AR($\infty$) process.

This is the reason why the ACF plot is helpful in indicating the number of lags, as in this MA($1$) process $\epsilon_t + 0.8 \epsilon_{t-1}$, in which only one lag shows significant correlation, and the PACF shows typical oscillating values that progressively decay: 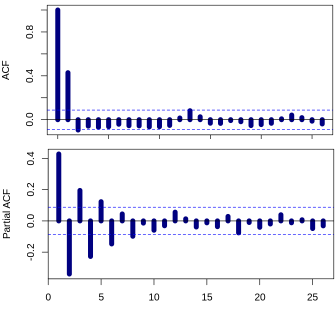 Applying a PACF to a MA process will not result in "shut offs", but rather a progressive decay: controlling for the explanatory contribution of later random variables in the process does not render more distant ones insignificant as it was the case in AR processes.

Robert Nau from Duke's Fuqua School of Business gives a detailed and somewhat intuitive explanation of how ACF and PACF plots can be used to choose AR and MA orders here and here. I give a brief summary of his arguments below.

A simple explanation of why PACF identifies the AR order

Time series can have AR or MA signatures:

AR signatures are often associated with positive autocorrelation at lag 1, suggesting that the series is slightly "underdifferenced" (this means that further differencing is necessary to completely eliminate autocorrelation). Since AR terms achieve partial differencing (see below), this can be fixed by adding an AR term to the model (hence the name of this signature). Therefore a PACF plot with a sharp cut-off (accompanied by a slowly decaying ACF plot with a positive first lag) can indicate the order of the AR term. Nau puts it as folows:

If the PACF of the differenced series displays a sharp cutoff and/or the lag-1 autocorrelation is positive--i.e., if the series appears slightly "underdifferenced"--then consider adding an AR term to the model. The lag at which the PACF cuts off is the indicated number of AR terms.

MA signatures, on the other hand, are commonly associated with negative first lags, suggesting that the series is "overdifferenced" (i.e. it is necessary to partially cancel out the differencing to obtain a stationary series). Since MA terms can cancel an order of differencing (see below), the ACF plot of a series with an MA signature indicates the necessary MA order:

If the ACF of the differenced series displays a sharp cutoff and/or the lag-1 autocorrelation is negative--i.e., if the series appears slightly "overdifferenced"--then consider adding an MA term to the model. The lag at which the ACF cuts off is the indicated number of MA terms.

Take a basic ARIMA(1,1,1) model, presented without the constant for simplicity:

Defining $B$ as the lag/backshift operator, this can be written as follows:

which can be further simplified to give:

We can see that the AR(1) term gave us the $(1-\phi B)$ term, thus partially (if $\phi \in (0,1)$) increasing the order of differencing. Moreover, if we manipulate $B$ as a numeric variable (which we can do because it is a linear operator), we can see that the MA(1) term gave us the $(1-\theta B)$ term, thus partially cancelling out the original differencing term—$(1-B)$—in the left-hand-side.

On a higher level, here is how to understand it. (If you need a more mathematical approach, I can gladly go after some of my notes on time series analysis)

When studying random variables, there is the question of how to estimate their parameters, which is where the method of moments, MLE and other procedures and constructs come in, as well as inspecting the estimates, their standard errors and etc.

Inspecting the estimated ACF and PACF come is from the same idea, estimating the parameters of a random time series process. Get the idea?

If you think you need a more mathematically inclined answer, please let me know, and I'll try and see if I can craft something by the end of the day.

Not the answer you're looking for? Browse other questions tagged time-series arima autoregressive moving-average or ask your own question.

3
Selection of an ARIMA model looking at the ACF and PACF
6
Invertibility of AR(p) model
1
acf and pacf suggests MA but auto.arima gave AR

9
Interpretation of the partial autocorrelation function for a pure MA process
5
Identifying seasonal ARIMA model in R
1
ARIMA Analysis (Box Jenkins Method) In R
2
How to interpret PACF?
0
Sales forecasting. What model to choose and how to interpret ACF/PACF?