I have two matrices $A_1$ of size $N\times K$ and $A_2$ of size $M\times K$ which contain data and every row has a corresponding label $y \in {1, 2, 3}$. I want to learn a mapping between those two matrices $A_1$ and $A_2$. Is it possible to do it using some machine learning technique? For example can I learn a Neural Network given the input of $A_1$ and output $A_2$ for the each of the labels? Is it possible to create such kind of ANN?

If I understand your question correctly, you have two data sets with the same classification tasks. However, you have absolutely no clue about linking the records but the classification output $y\in\{1,2,3\}$.

As an example, you mention classification based on images (case A) and text (case B). If I extend the example, you may have three authors (let's call them John, Jack, and Jim) of different pieces of text and you may have some photos of them. You are willing to get for a photo a piece of text.

One simple way is to

There may be a couple of ways how to classify and combine. One natural may be: take the winning class and pick an arbitrary/representative B record for that class. This would mean: given a photo, give me a piece of text written by that individual. Another way may be to take the probabilities $P(class=i|A~ record)$ and calculate e.g. the weighted center as a B record $$ B~record = \sum_{i=1}^3 P(class=i|A~record) \cdot \mu_B(i) $$ where $\mu_B(i)$ is mean of all B records for class $i$.

Another (similar) way is to

Finally, the most challenging way is based on MLP

The resulting classifiers will have the same two layers, with completely same weights. Thus, you can easily map to A records to $h$-dimensional space.

The final step in this approach is to find the mapping from that $h$-dimensional space back to B. This can be done in the following steps: 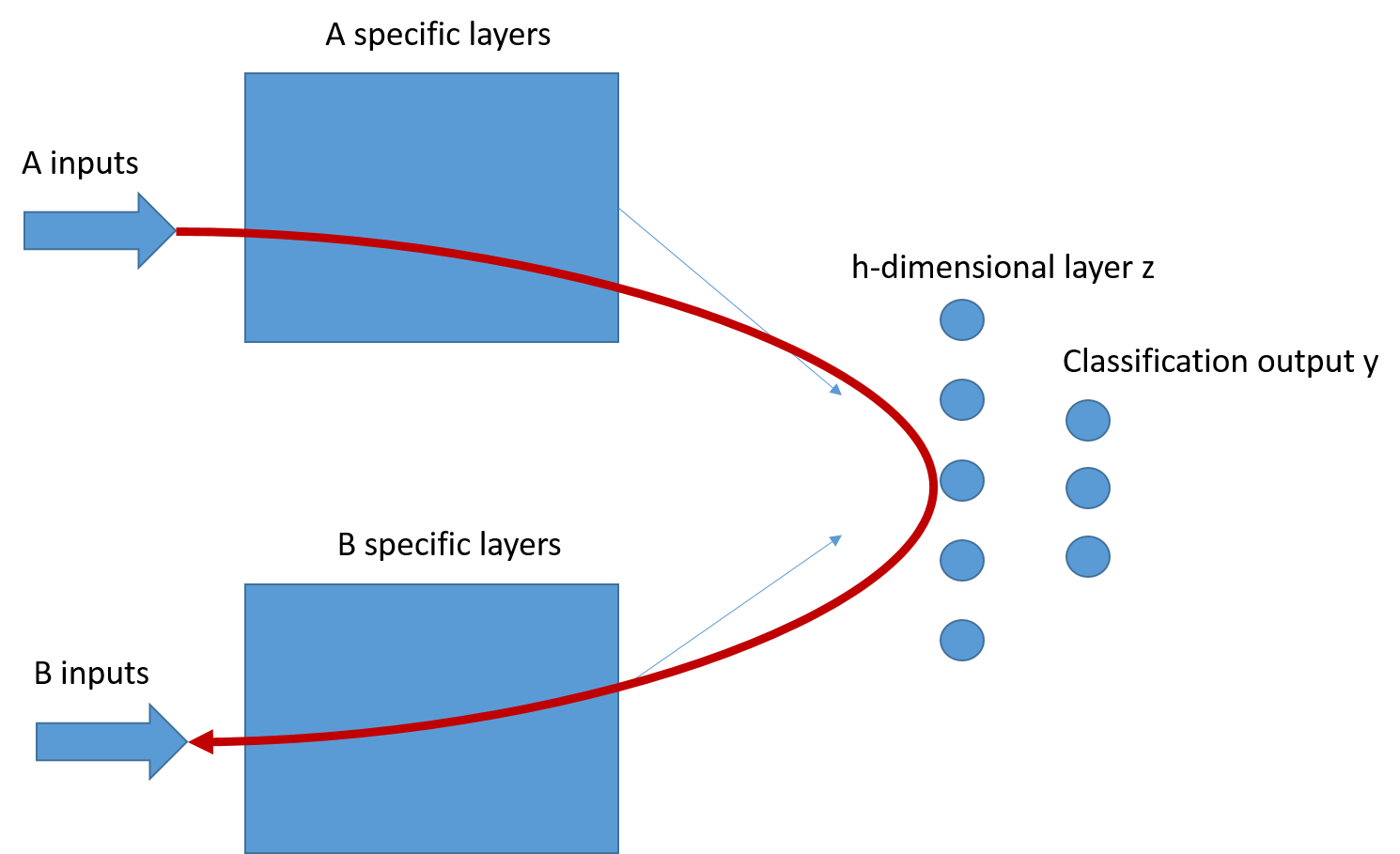 For the implementation in python, you can benefit from the existing MLP implementation where it is possible to read and write the weights directly ( http://scikit-learn.org/stable/modules/neural_networks_supervised.html ) as coefs_ and _intercepts. You can define all considered mappings. After that, you can define a function error(w) which will split all weights w into specific weights wA,wB,wz,wd. Then you can substitute them into particular models and calculate corresponding error. You can minimize the error function by means of e.g. gradient-free optization ( http://www.scipy-lectures.org/advanced/mathematical_optimization/#gradient-less-methods ). The training of the z to B mapping is straightforward.

Group all the vectors that have the same label. Now, create a network with the input and output dimensions as the same, here it is K. Use squared error as loss function. In training, for an input vector in matrix A1, find the loss against all the vectors with the same label in A2. This way I think you can learn a decent mapping. But you will need a lot of data to train this. Keep at least one layer with less number of neurons than K.

To validate this network, send an input from A1 (which you haven't used in training) to the network look at it's output. See the vector which is the closest to the input in A2 and see if they are of the same label.

Not the answer you're looking for? Browse other questions tagged neural-networks domain-adaptation record-linkage or ask your own question.