I know that from Hastie et. al's paper, that in the single response $y$ LASSO, the $\lambda$ values are chosen such that: $N\alpha\lambda_{max} = \max_l |< x_l, y_l > |$ Also, $y$ is by default standardised before forming the grid of $\lambda$ values on log-scale. Then, the grid is de-standardized by multiplying back by $\sigma_y$.

I'm trying to understand how this is done if $Y$ becomes a matrix (i.e multiresponse). Any ideas how $\lambda$ would then be formed?

Short answer for the simplest case (no intercept, no standardization)

If you want to add intercept handling / standardization of $X$ and/or $y$, see discussion elsewhere on this site.

So where does this come from?

The first term on the RHS is just the gradient of the smooth $\ell_2$-loss; the second term is the so-called subdifferential of the $\ell_1$-norm. It arises from an interesting alternate characterization of derivatives for convex functions which can be extended to non-smooth case quite easily. (See below for some details) For now, it's sufficient to know that it's a set of numbers and we need 0 to be in that set at the solution.

This is a set of vector equations with $p$ elements on each side, so let's look at just the first one:

Now, let's consider the group lasso penalty for the multi-response Gaussian, defined as

We can do an analysis like before, but here we need the subdifferential of the $\ell_1/\ell_2$-mixed norm. It can be shown (below) that it is given by the $p$-fold Cartesian product of unit-or-smaller $k$ vectors.

As before, we get:

So where does this all come from? Let's start by noting an important fact about convex functions: their Taylor series under-estimate them. That is, if $f$ is sufficiently smooth and convex, then the Taylor expansion of $f$ around $x$:

This follows from Taylor's remainder theorem which says that the error will be of the form $f''(x)(y-x)^2/2$ - if $f$ is convex, then we have $f''(x) \geq 0$ everywhere, hence the Taylor series underestimates.

If we turn this around, we can say that for a convex function $f$, we can find $c$ such that 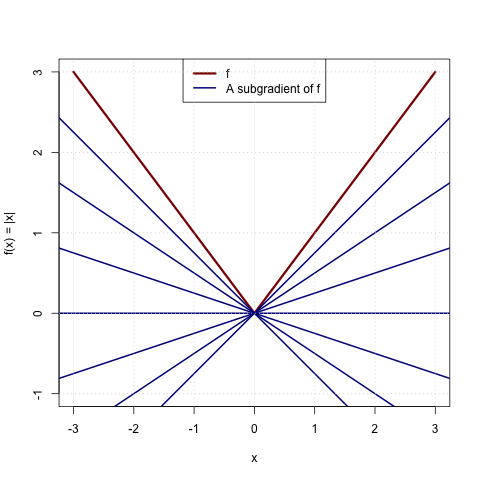 Any of the blue lines (Taylor-type approximations using a subgradient) are everywhere below the red line (the function).

For the general $\ell_1$ norm on $\mathbb{R}^p$, it's not hard to see that the subdifferential is just the $p$-fold Cartesian product of the univariate subdifferential since the $\ell_1$-norm is separable across entries.

If we want to consider more general norms (e.g., the mixed $\ell_{1, 2}$ norm), we can invoke a more general theorem characterizing the subdifferential of norms.

Let $\|\cdot\|$ be a general norm. Then its subgradient is given by

One direction of the proof is easy: suppose $v$ is an element of the RHS above. Then consider the Taylor type expansion of $f(\cdot) = \|\cdot\|$ around $x$ evaluated at $y$ with (potential) subgradient $v$:

Hence, finding the subdifferential reduces to calculating the dual norm. Fortunately, dual norms are exceptionally useful and hence well-studied. The simplest case is the standard $\ell_p$ norms where it can be shown that the dual of the $\ell_p$-norm is the $\ell_{p^*}$-norm where $p^*$ is the so-called Holder conjugate of $p$ and satisfies $1/p + 1/p^* = 1$.

sorry I'm new to the community, still trying to get the hang of it! Thank for editing my question @F. Tusell. The link to the original article came from: https://web.stanford.edu/~hastie/Papers/glmnet.pdf.

But the paper did not mention much about what was done regarding multi-variate response. The vignette for the R package glmnet (link: https://web.stanford.edu/~hastie/Papers/Glmnet_Vignette.pdf), on page 17, explained how the objective function looked like, incorporating the group LASSO penalty. But, I can't seem to be able to reproduce value of lambda_max used to form the grids.

Not the answer you're looking for? Browse other questions tagged optimization lasso glmnet or ask your own question.

28
Why is glmnet ridge regression giving me a different answer than manual calculation?