Is there a simple example or a mathematical demonstration of why direct and reverse regression (covariates included) can give contrasting results?

I found that, in examining the gender wage gap, there are cases where direct regression shows that men earn more than women with the same educational level (or qualification measured whatsoever) but men are more educated (or qualified) than women earning the same wage. Formally, if: $Y$ is wage, $E$ education and $G$ an indicator for being men: $Y=\alpha+\beta*E+\gamma*G$, and $E=\alpha^*+\beta^**Y+\gamma^**G$, we would have both $\gamma>0$ (an indicator of discrimination for women, paid less than men with the same educational level) and $\gamma^*>0$ (an indicator of discrimination for men, more educated than women with the same wage). I read that such paradox would not occurr if we could measure productivity without error (being education or measured qualification basically a proxy for it). However, what I'm interested in is (any variable could replace gender, wage and education) a fabricated simple numerical example (I was thinking at $2$ educational level and $2$ income levels, so to have a $2 \times 2 \times 2$ table) where this occurs. Alternatively, also how a mathematical demonstration that such situation could occurr would help.

Green concludes that "sign and magnitude" (of $c^*$) "may have nothing to do with discrimination".

I'd say that $k$ reflects wage discrimination (in case employees consider qualification to be fully expressed by $E$), $1-R^2_{y,x,d}$ the part of variance of the wage depending on the error term $\epsilon$ (thus, unexplained) and $\bar{y}_m-\bar{y}_f$ the difference in wage, due to both discrimination and higher average education of men. Thus, $\bar{y}_m-\bar{y}_f>k$, and whether it will remain above $k$ even after multiplication by $(1-R^2_{y,x,d})$ depends on:

1) The difference in qualification between men and women (leading to higher $\bar{y}_m-\bar{y}_f$ independently of discrimination).

2) The variance of the error term, leading, in case of men and women earning the same salary, to lower educational level for women vs men (average $\epsilon$ higher for women in the direct regression), given the former have a lower global expected value than the latter).

@ Martijn Weterings: It seems to me things are more easily understood if we notice that, with men having a higher educational level wrt women in average, if we compare men and women with the same wage, we are looking at a subset of the observations where women have higher $\epsilon$-values than men (even in absence of wage discrimination). If we had a problem of common support (the highest wage levels only available for men, the lowest one only for women), we could conclude that richest men would have an average $\epsilon$ higher than $0$, and the poorest women lower than $0$ to compensate for that. But, in a common support situation, it seems to me we would have a version of the Simpson's paradox: women would have a higher $\epsilon$ for each wage level, but, in the case of higher-wage groups (associated not only to being men - in case of discrimination, directly - and being more qualified, but also to higher $\epsilon$), we would find a higher number of men, and the other way round for lower-wage groups.

The example (image + R-code to create it) below may explain the paradox by regression to the mean.

A requirement is that the group means are different.

Now if the group means are different then this will interact with the 'flatter' regression line. In the below example: the smaller regression coefficient, more horizontal/vertical line, will result in a larger parameter for the gender effect (because the genders do not have the same means and are distributed unevenly over the error of the regression to the mean).

(If you would like some help to improve your intuition then you may imagine the relationship with very low correlation. In that case the regression lines become very vertical/horizontal. The regression line is expressing a sum of effect+randomness, it is a prediction of one variable based on the other and the more randomness the closer the prediction is to the average, and thus is smaller than the effect alone. Then the direction depends on the relationship, which is not paradoxical as it is a different situation to predict x based on y then predicting y based on x. Imagine the intuitive idea of very low correlation for that again, in which case the prediction should be closes to the average than to the effect. The regression line coefficient expresses this prediction. The regression line coefficient is not the naked effect-size, without the random effect. See also the R-code example in which the parameter used to generate the data is not the same as the effect size from the model)

This has to do with the genders not being evenly distributed among the classes. Say we look at education e_i which would associate according to the model with salary s_i. The females will have a relatively larger number with lower education than e_i, and the fraction of them that, still make salary s_i, will outweigh the men.

So, on average, in comparison to men, women will have the lower education, for the same salary class, because at a given salary class there are more women that are overpaid than men that are underpaid. And... this is not because women have an advantage. Instead, it is because there is a larger number of low educated women!

Note: other explanations may be non-linearity 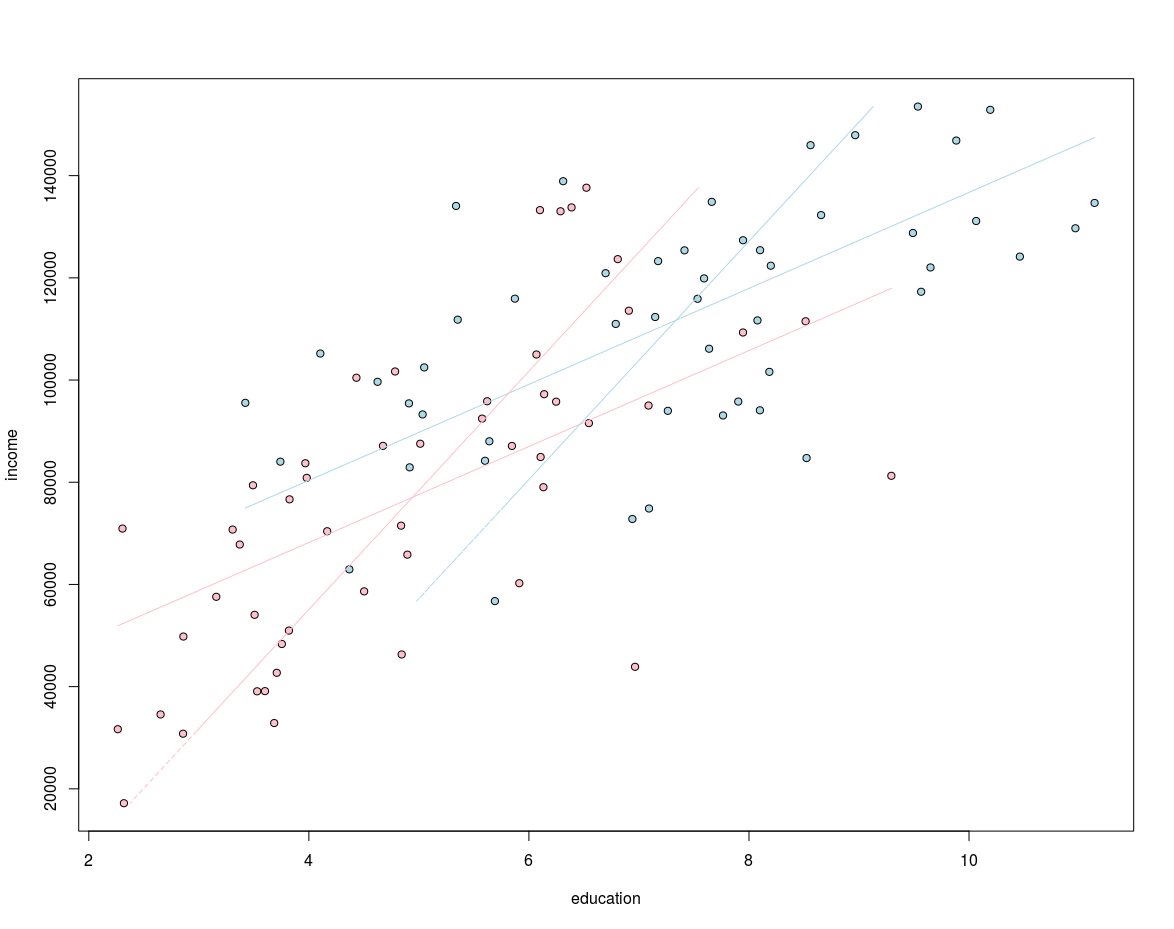 Based on your comments I have adjusted some parameters in the model, in order to make the mathematical demonstration of the paradox a bit more dramatic.

The regression line for income ~ education has the same coefficient as the parameter that was used in the model to create the data.

However, regression/correlation does not equal causation. It is in the switch of meaning from correlation to causation, which can be interpreted in two (or 3) different ways, income as function of education or education as function of income (or a combination), that the paradox occurs. You should pick only one option and if you take multiple interpretations then you get the conflicts (which are only seemingly a paradox/conflict since you made at least one wrong interpretation if you picked multiple options).

The regression lines should be foremost interpreted as predictors.

(The fact that, at the same salary level, women have a lower expected education than men, should not be automatically turned into the interpretation that women have an advantage, which would mean that there is a systematic advantage, that is, a causal effect that gives women an advantage. In this example it is obviously demonstrated as men are explicitly given the advantage.)

And as the new image clearly shows in an intuitive way. $E(y \mid x) \neq E(x \mid y)$. Since you will have approximately the average value for the dependent no matter what the independent value is $E(y \mid x) \sim \bar y$ and $E(x \mid y) \sim \bar x$.

The image may also provide an intuition why, given the same salary, men have a higher education (which may be interpreted as a disadvantage if you see this correlation as a causal effect). The assumption that the correlation 'men have higher education as a function of salary' relates to a disadvantage, is a version of the error that a correlation is seen as a causal effect (and so this paradox is a version of that error too). 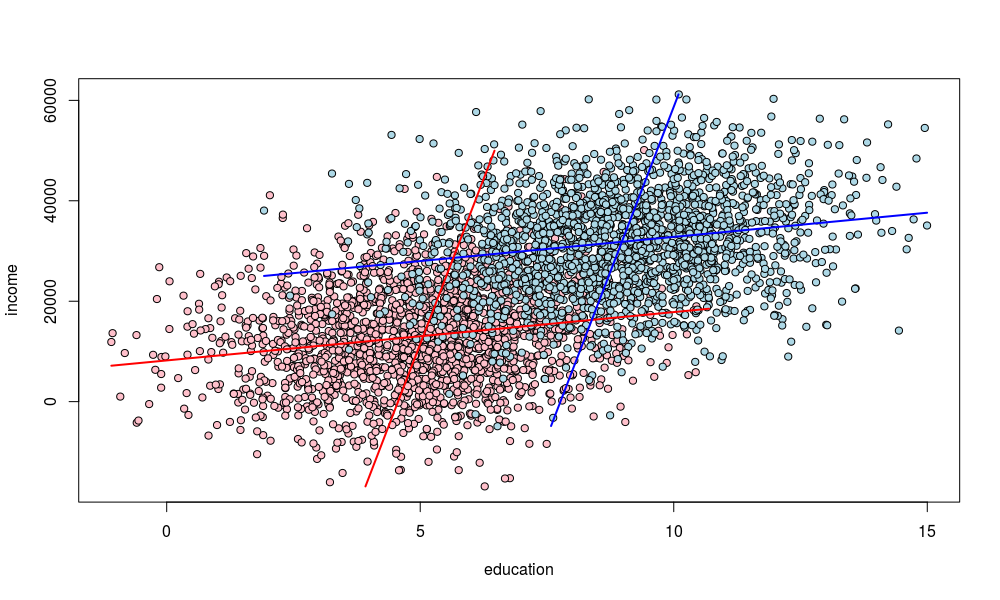 132
What is the difference between linear regression on y with x and x with y?
5
Foundations behind Linear Regression / Statistical Modelling