I'm working on a survival analysis in R using the survival package - and I am wondering what modifications I need to account for when using right-truncated data (which I think is what I have) (there doesn't seem to be as much info on this as the other types of truncation or censoring!)

Briefly - insects evolve resistance to insecticides, and cease to be useful - I have the duration before the evolution of resistance for certain insecticides used against various insect pests - however, the insecticides only show up if resistance evolves - if resistance never evolves, there is no record for that event (since it hasn't happened). Here is a bit of what the data looks like:

Where "until_res" is the years until resistance evolves. Insecticides with no resistance aren't there. There isn't really a record of it (since it would require figuring out everywhere in the world a certain chemical has been applied to a pest, and generally reporting only occurs when resistance evolves). 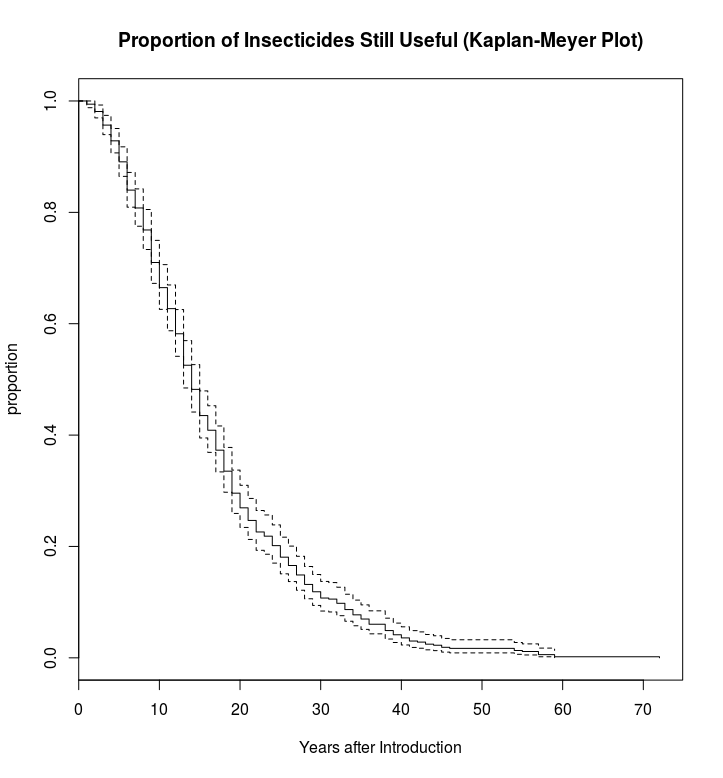 I've read that I need to account for this in modelling, but haven't found any examples - does anyone have any advice? Thanks!

This is right censoring for failure time for each product type. Failure is defined as becoming not useful. There is a slight difference between truncation and censoring. Different books define it differently but censoring suggests an unknown time, not a hard cut-off for the scale. There is nothing wrong with using Kaplan-Meier analysis to describe a small population but don't draw inferences.

Make a list of all pesticides of interest, including those that are still useful. You will need the date of introduction. You have the duration data for products that reached a failure time. If the product is still on the market, it is censored because it is still useful. You believe it will fail sometime in the future, but is censored at the time of the analysis. The duration is the difference between the current date and the introduction date. The value for the censor variable is set to 1.

Products removed from the market for unrelated reasons before reaching failure are also censored.

Don't think about the years when the products entered the market. Instead think about every product at the start and then the duration to the failure event. Censoring is often confusing because books explain studies with a censoring time, for example, stop the study after 1 year. However this type of observational study is also accepted.

This isn't a right truncation issue. This is a sampling bias issue. You are attempting to do infer the time-to-development of pesticide resistance for the population of all pesticides, using only data on pesticides that induced resistance. I'm not aware of a statistical method to overcome the inherent limitation of the data for this particular research question.

I think that this is a right truncation issue, similar to the case of the estimation of incubation period in infectious diseases. Read chapter 5.3 on Klein and Moechberger (2d edition). The key is to do a change of variable to get left truncation which is simple to analysed..

Not the answer you're looking for? Browse other questions tagged r survival truncation or ask your own question.