To make it easy to understand, I'll simulate some data here. Some sudo code: 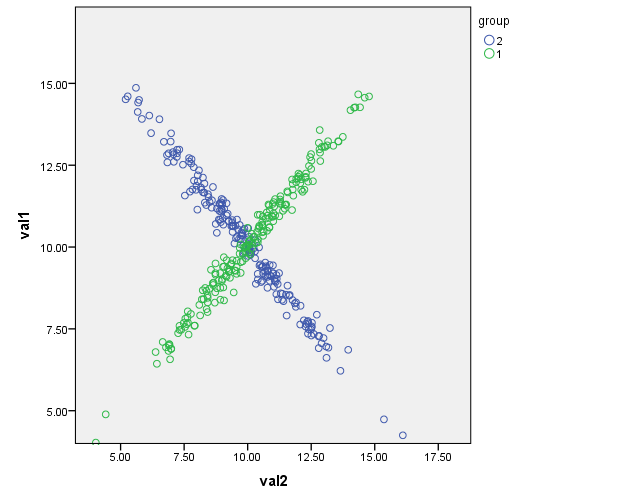 Two groups have exactly the same mean and sd for both variables. But obviously two groups are different. One of the most distict difference is that the associations between two variables are ~1 for group0 and ~-1 for group1

I have tried all the methods in SPSS, only artifitual neural network can classify (yes techniquely the other methods are cluster not classficaiton) two groups with a satisified accuracy (~98% in this case). But I think it is because ANN is supervised/classification methods. I haven't tried other supervised methods because ANN is the only one in SPSS as far as I know. MANOVA reported significant difference but this different cannot be virsualized if plot two variables individually. Neither variable was signficant in logistic regression. Discriminant analysis did not work either. Is there any way to classify them? I am new to R but as a programmer I don't think it is big problem for me as long as there are pre-coded packages for the classification methods.

I am not sure if my question can be summarized as: is it possible to (unsupervised) cluster two group with same mean and sd. I am asking this is because in medical research, it seems most people only care about absolute concentration of a protein/drug/other factors and regression is widely appied to access the impact of the protein/drug/other factors to a certain condition. I am wondering if there is any important info ignored by those analysis methods. (like the example above v1 is protein1 and v2 is protein2, group1/2 is have the disease or not)

I apologize if similiar question has been asked many times, if it does, please let me know what is the best word(s) to describle my problem so I can search it in google. Thanks a lot.

Browse other questions tagged classification correlation biostatistics or ask your own question.