I have one linear regression between a variable of interest (z) and measured values of another variable (y):

and another regression between y and a proxy variable (x):

I want to make the case that x is a reasonable proxy for y in estimating z, using these two consecutive regressions. Can I calculate the r2 for the regression between z and predicted y, accounting for the error produced by predicting y from z?

Thanks so much for any help.

Let's begin by simplifying the situation. By centering and scaling all data variables appropriately we may create new ones $X,Y,Z$ whose averages are zero and whose lengths, thought of as Euclidean vectors, are unity. When this is done, as is well-known, the regression models are equivalent to

and the errors $\varepsilon_{ZY}$ and $\varepsilon_{YX}$ still have zero means and are independent (within each model). The least-squares solutions are the cosines of the angles among these (unit vectors), $\hat\alpha=\cos(ZY)$ and $\hat\gamma = \cos(YX)$. These cosines are usually called the correlation coefficients. Their squares are the $R^2$ statistics for the regressions (which haven't changed as a result of the centering and scaling).

is $\hat\beta = \cos(ZX)$. This allows us to recast the question as one of (three-dimensional) Euclidean geometry:

How well can the (cosine of the) angle $XY$ be estimated based on estimates of the cosines of the other two angles, $ZY$ and $YX$? 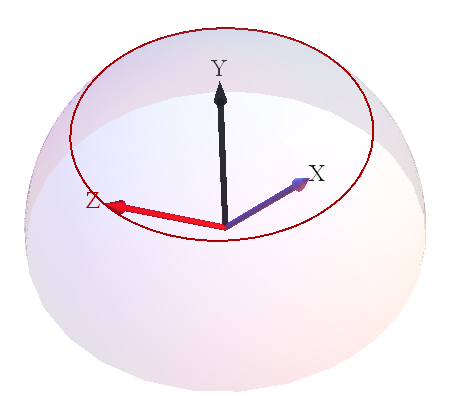 This figure shows $X$ situated relative to $Y$. Given the depicted angle between $Z$ and $Y$, the possible locations of $Z$ lie on the red spherical circle shown. Parts of this circle (near the right) are relatively close to $X$, but other parts (near the back left) are nearly at right angles to $X$. Depending on where $Z$ actually is on that circle, $X$ might or might not be close to ("a good proxy") for $Y$.

An R implementation to simulate a dataset of any size and any valid set of correlation coefficients (as specified by angles or directly by modifying rho) follows. It will enable you to experiment with the possibilities.

Not the answer you're looking for? Browse other questions tagged regression error-propagation or ask your own question.