I created a neural network model for a classification task based on 14 variables, 1 hidden layer of size 8. Outputs give 3 possible classes.

The weights I got from input (left) and output (right) layers: 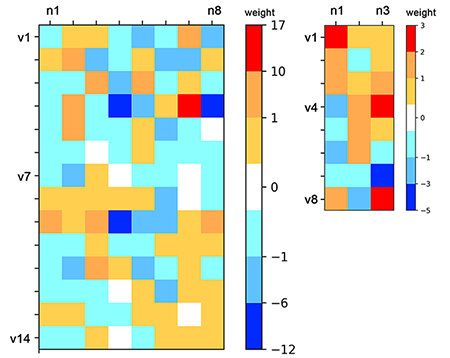 The variables v4 and v9 are initially guessed as most relevant for classifying. However, they have very distinct weights among the neurons (17 or 10 to -12).

In the output layer, v7 always has negative weights, which reduces the importance of the highest weight of v4 on n7.

I also did repeated runs of independent training sessions to check the behavior of the model, and then I summed the total positive and negative weights of each variable from the input layer each time. The results showed that v4 and v7 are apparently always top ranked (see below). But considering the output layer, and the distribution of negative weights, I realized that v4 and v7 are perhaps not the best variables for classification.

The interpretation of weights is generally a challenging task.

Regarding your specific concern:

Not the answer you're looking for? Browse other questions tagged neural-networks categorical-data weights or ask your own question.

27
Can't deep learning models now be said to be interpretable? Are nodes features?

3
Neural networks creates negative output
1
Positive or negative effect of neural network inputs on output in binary classification (MATLAB)?
1
Neural Network with unknown number of Neurons in output layer
6
Neural networks - how can I interpret what a hidden layer is doing to my data?
0
What is the difference between calculations and output of individual neurons in a layer of neural network?
2
Statistically compare neural network hyperparameter values
1
Comparing Neural Networks
1
How to find weights and threshold of decision boundaries?
1
Understanding ReLU: Does this (unlucky intialized) network assign all instances to the same class?