I am using a neural network model for a classification task with 13 inputs. I study through the connection weights to depict the relevant variables. I have also made a correlation matrix to check the relationship between them: 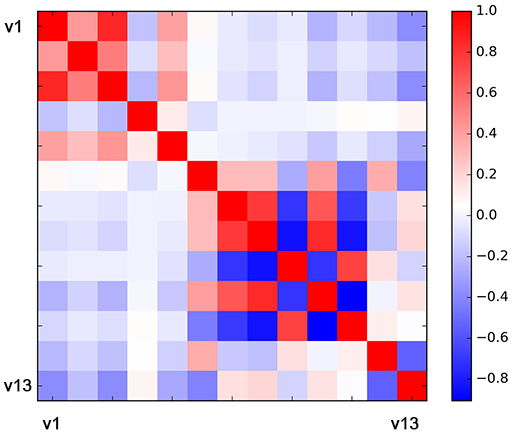 Some groups of variables seem to have strong positive and negative relationships. My fear is that I would have to remove some because they are redundant (?). However, I may consider keeping them to let the network decide by itself which ones to use among those to get rid of.

Is it generally advised to remove redundant information (if highly correlated) when training neural networks?

My study aims at defining the best variables to use (for similar future classification task) so that we get the best prediction performance at the end. In this purpose, I have removed some of the highly correlated variables but got lower prediction accuracy.

Is it generally advised to remove redundant information (if highly correlated) when training neural networks?

Is it necessary? No.

Since a neural network with an appropriate architecture can model any (!) function, you can safely assume, that it also could first model the PAT and then do whatever it also should do -- e.g. classification, regression, etc. (source)

In principal, the linear transformation performed by PCA can be performed just as well by by the input layer weights of the neural network, so it isn't strictly speaking necessary (source)

This is because Neural Nets could be used as a non-linear dimensionality reduction tool:

In this context, it is also worth mentioning auto-encoders.

Can it help? Yes, it speeds up things.

Speed comes at a cost /slash/ bears a risk

The disadvantage of using PCA is that the discriminative information that distinguishes one class from another might be in the low variance components, so using PCA can make performance worse (source)

This might really be what you have experienced in your experiment.

Not the answer you're looking for? Browse other questions tagged correlation neural-networks or ask your own question.

10
Does Neural Networks based classification need a dimension reduction?
13
Does correlated input data lead to overfitting with neural networks?

9
How to propagate uncertainty into the prediction of a neural network?
23
Deep learning : How do I know which variables are important?
1
Why is it possible to train a semantic segmentation neural network like U-net/Tiramisu from scratch using small data-set like few hundreds
4
Is background subtraction common practice for image classification?
0
Does the order of the columns in an CSV file affect the performance of my neural network?
0
Why a set of highly correlated feature can sometimes perform better than low correlated feature on neural network?
1
Artificial Neural Network and PCA