Interpreting interactions in a linear model vs quadratic model

I have a crop yield data collected across many locations for 1996-2006 period and a predictor measuring heat availability.

The results show me there is a positive interaction between heat and year. Is my interpretation correct: "As year increases, the relationship between heat and yield gets steeper. Implying, in 1996, heat decreased yield more than in the year 2006".

Adding to the equation is a quadratic term:

I do not understand how to interpret the interaction when both linear and quadratic term are present in the model? Can anyone explain (perhaps a bit simply) how to interpret this interaction and what does it mean for crop yield, heat and year? It would be great if a rough graphical explanation is shown as well.

My favorite way to understand an interaction between two continuous predictors (e.g. heat and year) is to plot it with the full range of one predictor on the x-axis and a few different lines representing potentially interesting values of the other predictor --- I usually pick three, representing low, medium, and high levels of the predictor, but you can play around with it depending on your data.

For your specific case, here is some example code. First, since you didn't provide example data, I'll generate some that (very roughly) matches the parameter estimates you provide:

Basically, I just used the fixed effect estimates from your model and added a little normal noise. For your own purposes, of course, you will use your real data and real fitted models.

From your question, it seems like you're interested primarily in the overall fixed effects (not the estimates for individual locations, etc.), so I'll focus on that. If you want to get into visualizing the results for individual locations, I recommend this awesome blog post: https://tjmahr.github.io/plotting-partial-pooling-in-mixed-effects-models/

Here are the fixed effects as I estimated them (they're a bit different from your estimates, so your plot will look a bit different, too, but I think it's close enough to be useful):

Now let's plot it to take a look at that interaction. I'll choose to put heat on the x-axis and have three representative lines for low, medium, and high values of year, but you could switch and do it the other way if you prefer. I'll use those values (the full range of heat and the three example values of year) to generate predicted yield scores for each combination based on the fixed effects estimates from the model. 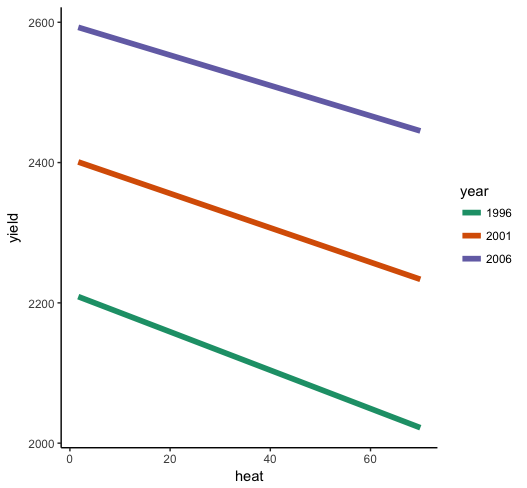 So what do we see here? First of all, the interaction is very small relative to the individual effects of year and heat --- the lines look almost parallel. But you know from the parameter estimates that it is significantly different from zero, so it's there even if it's small. heat has a negative effect when year = 0 (ideally, you will have centered both predictors before estimating the model, so this would be "at the mean of year"), and the positive interaction term indicates that as year increases, the effect of heat gets less negative, so it weakens. What you should look for in the plot is the slope to be a bit shallower for higher years than for low years.

The second model seems much more complicated, but it's actually just as easy to plot, almost! We'll do the same procedure as before, first getting the fixed effects from the model then generating some plotting data with the full range of heat, selected values of year, and predicted values for yield based on the fixed effect estimates.

First, since I don't have your real data, I'm re-generating another dataset that will (roughly) match the parameter estimates of the second model, so we can get a more or less accurate plot.

Get the fixed effects:

We can use exactly the same plotting code as before, just feed it the updated dataframe: 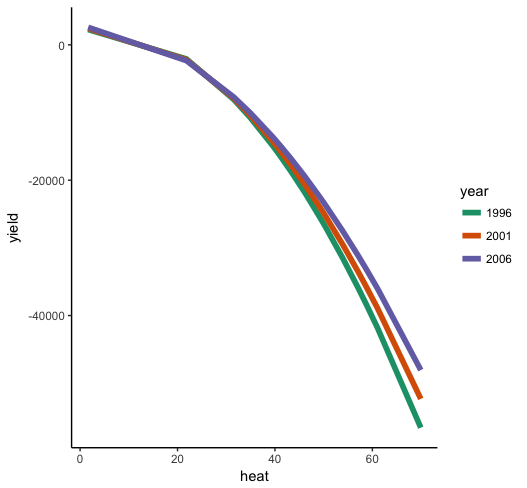 You should be able to generate plots for your own data using this code. I always find having a visual is extremely helpful when interpreting interactions, especially in models with more than a few coefficients (such as your model 2).

(Note that if the ranges for heat and year are pretty different in your data to what I came up with generating these data, then your plots might look quite different even though the parameter estimates are similar.)

A final note on plotting and interpreting interactions

My guess from your parameter estimates is that you didn't center year and heat before estimating the model, which is why I didn't either. But you probably should. Not only does it ease some model estimation issues like multicollinearity, it makes interpreting your interactions easier since 0 values are more meaningful. For example, the parameter estimates you're getting for heat are the predicted change in yield for each additional unit of heat when year = 0. Unless you've centered year (or you're studying heat and yields in antiquity), you're probably talking about values far outside of the range of your data. Your estimate for the effect of heat will be much more meaningful if you center first.

Taking derivative respect to heat we get marginal effect that is:

We can rearrange part of interest of ME in the following way:

It means that greater heat we have then slower it's positive effect decline with each year.

Also heat may change year by year so its effect will vary. Wheather we expected to have positive or negative time tendency depends on heat value.

Not the answer you're looking for? Browse other questions tagged r interaction lme4-nlme quadratic-form or ask your own question.

9
Interaction term using centered variables hierarchical regression analysis? What variables should we center?
4
How to include an interaction with a quadratic term?