In a data set I have, all of the results of the residual vs. predicted values appear as parallel lines as pictured below. I interpret this according to my training as a violation of homoscedasticity which makes running a multiple regression untenable. 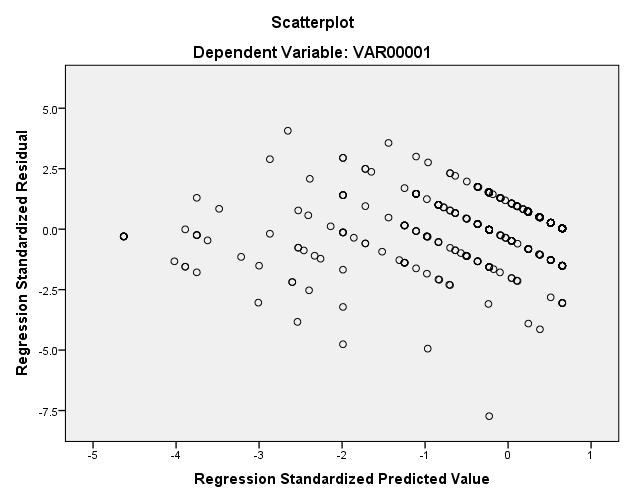 Here is some context about the data sets, type of analysis used, the design of the study, etc.

I've tried transforming the data using a log transformation and this did not at all help the apparent heteroscedasticity problem. Plotting the log transformed residuals vs. predicted values yielded the same general pattern in the chart.

The other technique I tried was outlined in this paper http://afhayes.com/public/BRM2007.pdf which described providing a regression model with heteroscedasticity-corrected error residuals. The beta coefficients for each predictor variable were essentially the same as the non-heteroscedasticity corrected model, as well as the overall R^2 value for the model.

Some of the predictor variables are highly correlated with one another, but around .6 - .8 - so there may be a slight multicollinearity problem - however, the tolerance and VIF values are fine. More intuitively, a lot of the participants provided similar satisfaction ratings for all of the predictor variables and the dependent variable. Quite a few on the 7-point scale answered things like " 7 7 7" for the predictors and "7" for the outcome or "1 1 1" and "1". However, this was not always the case.

Looking for some guidance around potential reasons for this, alternative ways to analyze the model, etc. Thanks in advance.

Transforming your variable cannot change the fact that you have only a few possible values, so no transformation can change this pattern.

Not the answer you're looking for? Browse other questions tagged multiple-regression residuals heteroscedasticity or ask your own question.

57
Is adjusting p-values in a multiple regression for multiple comparisons a good idea?
8
Parallel straight lines on residual vs fitted plot
1
Multiple Linear Regression - Residual Normality and Transformations
1
Regression with MI of missing values: estimating residuals
1
Regression or regression alternatives for data missing not at random
1
How to apply heteroscedasticity to multiple linear regression in R?
1
Weird shape of residuals vs fitted plot