My question in general is how to combine these two models in a sensible way. It seems to make sense if I just multiply the two together - however, I don't know what this expression evaluates to:

Or, with simpler notation:

(As many pointed out, this is wrong)

Let's say we have a problem of predicting whether a storm is coming or not.

So we'd like to predict whether a storm is coming or not (event $A$), and we have some clues available to us, namely the amount of clouds in the sky (event $B$) and how scared your dogs are (event $C$).

We can visualise the problem at hand using a Venn diagram: 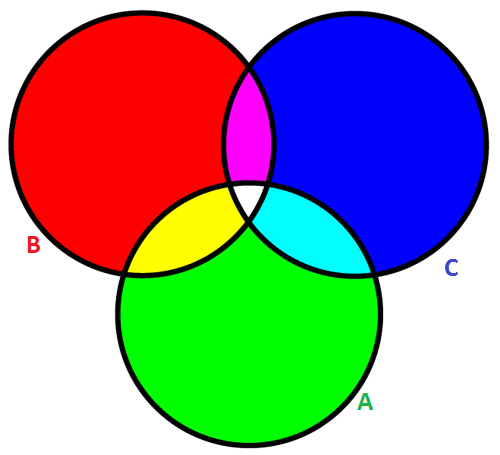 We are interested in calculating the probability of a storm given the clues, $P(A|B,C)$. That quantity isn't represented directly in the diagram; instead, we can get $P(A,B,C)$ (a.k.a $P(A \cap B \cap C)$) from the white central area in the diagram. Fortunately, the relationship between $P(A|B,C)$ and $P(A,B,C)$ is simple:

where $P(B,C)$ corresponds to the conjunction between the magenta and white areas of the diagram.

We didn't account for the area outside all the circles, which corresponds to $P(\tilde{} A, \tilde{} B, \tilde{} C)$, which is the chance that there is no storm AND there are no clouds AND the dogs aren't scared.

Let's apply the transformations we saw before:

As you can see, you would need more information if you want to calculate the probability of a storm given your clues. Namely:

If you think about it, numbers 1-3 make sense:

Number 4 is a bit trickier. If either your dogs or the sky (or both) are perfect predictors of a storm, then there is no need for the other.

so our previous model becomes

In my opinion your problem is not about that expression but about modelling. You have different clues (clouds, scared dogs) which provide evidence for a forthcoming event (rain). In other words, if I understand you, your question is actually more about: how to combine different clues?.

This question is dealt with in the field of graphical models. Let me refer to the corresponding Wikipedia site, and the references therein. Specially the paper by David Heckerman (A Tutorial on Learning With Bayesian Networks), and the reference to Christopher Bishop's Machine Learning book.

The example you give is very similar to those presented to describe the explain away effect, that is nicely described in this video.

Not really a simplification (if that is possible at all) but, if you wish a relation between $P(a \vert b)P(a \vert c)$ and $P(a \vert b,c)$, you could say that

I think that this relation is more theoretic and fun than useful. In practical cases you would use the simpler

so logically we have:

As $B$ and $C$ are independent, I think this is as far as this route extends.

As JonMark Perry has already mentioned, Bayes' theorem prohibits that your initial suspicion is true. The rules for conditional probabilities specifically allow for multiplication of probabilities only if conditioning under the same event (either B or C or both simultaneously). To show you a visualistion of the 2 probabilities take a look at this image of a tree diagram.. Within a branch of the tree, you may multiply the probabilities which is interpreted as both events having to happen simultaneously P(A and B) = P(A|B) * P(B) or P(A and C) = P(A|C) * P(C) . In order to combine to two different branches (the directions would be B and C) the probabilities have to be added. P(A|B) * P(B)+ P(A|C) * P(C) is then the probability that the storm comes up, independent of the clouds coming up or how scared the dogs are.

If the objective is to somehow combine the impacts of B and C on the probability of A, I think it make sense to evaluate the probabilities $P(A|B\cup C) $ and $P(A|B\cap C)$ where:

Not the answer you're looking for? Browse other questions tagged conditional-probability or ask your own question.

0
What does “if” mean in this question?
7
Conditional Expected Value of Product of Normal and Log-Normal Distribution
4
Solving P(TRUE) of finding counterpart pairs in 2 sets with constraints involving the Universal Genetic Code
2
What does it mean to “condition on X”?
3
How to calculate the probability that white will win a chess game?