I would like to test the hypothesis that two samples are drawn from the same population, without making any assumptions about the distributions of the samples or the population. How should I do this?

From Wikipedia my impression is that the Mann Whitney U test should be suitable, but it does not seem to work for me in practice.

For concreteness I have created a dataset with two samples (a, b) that are large (n=10000) and drawn from two populations that are non-normal (bimodal), are similar (same mean), but are different (standard deviation around the "humps.") I am looking for a test that will recognize that these samples are not from the same population. 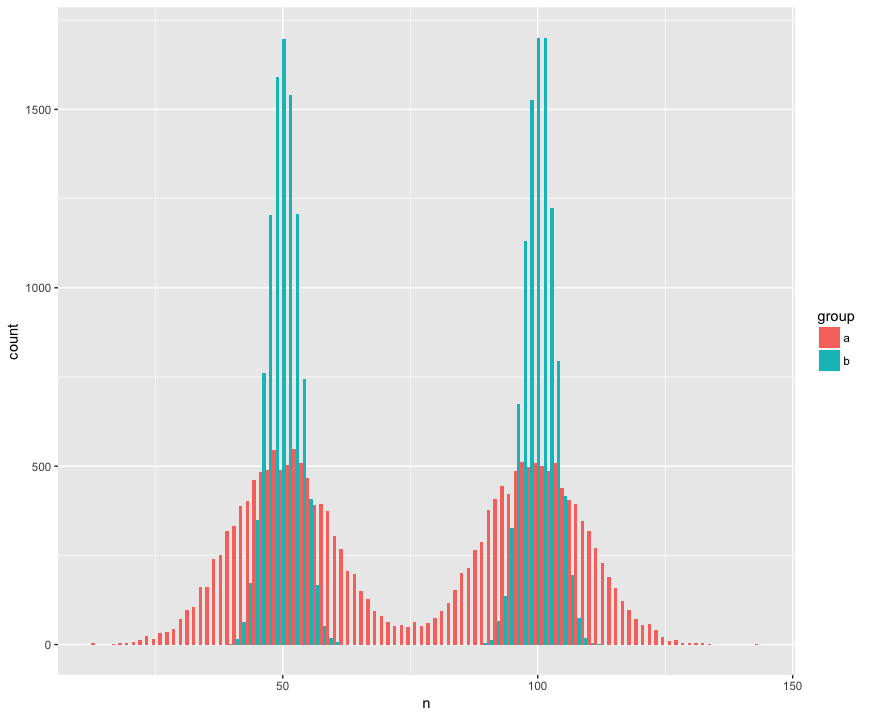 Here is the Mann Whitney test surprisingly (?) failing to reject the null hypothesis that the samples are from the same population:

Help! How should I update the code to detect the different distributions? (I would especially like a method based on generic randomization/resampling if available.)

Thank you everybody for the answers! I am excitedly learning more about the Kolmogorov–Smirnov which seems very suitable for my purposes.

I understand that the KS test is comparing these ECDFs of the two samples: 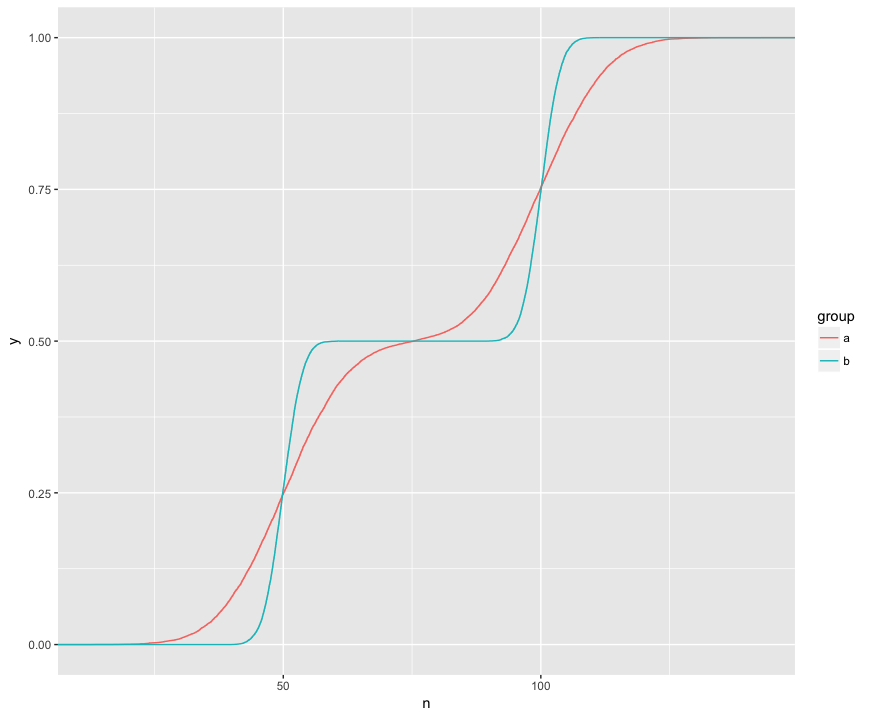 The KS test seems to be able to hypothesis-check each of these features:

That is really neat! I have a practical interest in each of these features and so it is great that the KS test can check each of them.

The Kolmogorov-Smirnov test is the most common way to do this, but there are also some other options.

The tests are based on the empirical cumulative distribution functions. The basic procedure is:

For the Kolmogorov-Smirnov test, the test statistic is the maximum distance between the two empirical CDFs (or if you want to be more technical the $L^\infty$ norm). This is super easy to implement in R:

If the $p$-value is smaller than your chosen threshold, we reject the null hypothesis that the samples are drawn from the same distribution.

Another option is the Cramer-von Mises test, which uses the squared $L^2$ norm as the test statistic and is implemented in the dgof package as cvm.test(). The CVM test is 'better' in the sense that the distance metric takes into account the whole of the two ECDFs, rather than just picking out the largest distance.

Suppose we have samples of size $n$ and $m$, which we want to apply our hypothesis test to.

To turn this into a sampling-type procedure, we can do the following:

Note that for the KS test, this is just a waste of computational effort because the quantiles are very simply characterised theoretically, but the procedure is generally applicable to any hypothesis test.

Not the answer you're looking for? Browse other questions tagged r hypothesis-testing nonparametric wilcoxon-mann-whitney-test wilcoxon-signed-rank or ask your own question.

5
Plotting non-parametric (E)CDEF confidence envelopes for comparison
2
Is there an inductive version of a traditional hypothesis test?
0
Testing that training and test data sets (not vectors) have been drawn from the same population in R