Is the Shapiro Wilk test W an effect size?

I want to avoid misusing normality tests where a large enough sample size will highlight any slight non-normality. I want to be able to say that a distribution is "normal enough".

When the population is non-normal the p-value for the Shapiro-Wilk test tends to 0 as the sample size increases. The p-value isn't helpful in deciding if a distribution is "normal enough".

I think a solution would be to measure the effect size of the non-normality and reject anything which is more non-normal than a threshold.

The Shapiro Wilk test produces a test statistic $W$. Is this a way to measure the effect size of the non-normality?

I tested this in R by doing a shapiro wilk test on samples drawn from a uniform distribution. The number of samples ranged from 10 to 5000, the results are plotted below. The value of W does converge to a constant, it doesn't tend towards $1$. I'm unsure if $W$ is biased for small samples, it seems to be low for small sample sizes. If $W$ is a biased estimate of effect size that could be a problem if I want to accept anything under $W=0.1$ as "normal enough".

My two questions are: 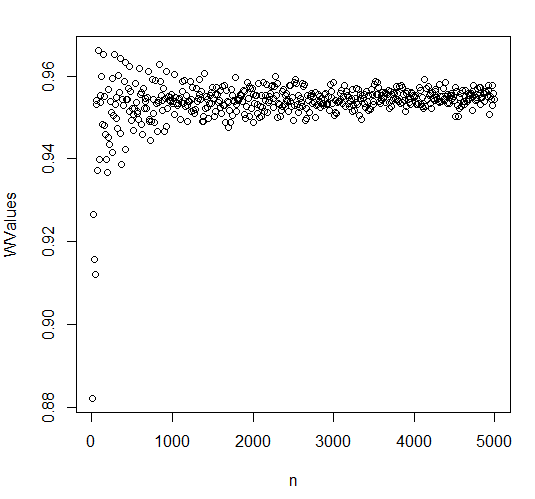 For $W$, it is similar (although the approximate distribution depends on the sample size as well). The lower bound for $W$ is $\frac{a_1^2n}{(n-1)}$, where $a_1$ depends on is the expectation for the smallest order statistic.

So no, it is no suitable effect estimator at all.

In fact, I think you are not yet sure what you are looking for as the term "effect" is a bit more difficult than in the usual parametric world of one-dimensional parameters. Here, the raw effect of a.s. not being normally distributed is infinite dimensional: Each measurable subset of $\mathbb{R}$ can have a different probability from the normal distribution model. For a one-dimensional effect, you need to weight it somehow and be aware of the consequences of various weights to your intended application. This way you would decide if e.g. a certain bimodal distribution with Gaussian tails is more normal than a certain unimodal distribution with heavy tails. In fact trading the tail behaviour against the non-tail behaviour might be the most relevant question to invent a suitable effect.

Then, if will be much easier to find an estimator for this particular effect.

Not the answer you're looking for? Browse other questions tagged hypothesis-testing normality-assumption effect-size or ask your own question.

4
How to determine effect size in addition to significance in statistical inference tests that do not explicitly estimate effect size?