Can the Wilcoxon rank sum test give a different result to the Kolmogorov-Smirnov test result?

The Wilcoxon rank sum test rejects, indicating that the "X" population distribution differs from that for "Y".

Is it possible that the two sample Kolmogorov-Smirnov test would not indicate that they're different?

Or can we predict that the Wilcoxon would not cause us to reject the null if the Kolmogorov Smirnov test did not?

The crux of @Glen_b's answer (+1) is that these are two different tests that are "designed to pick up... [different and] specific kinds of differences" between the two distributions. So to understand how the results (in terms of whether they are significant or not) can differ between the Wilcoxon rank sum test and the Kolmogorov-Smirnov tests, we need to understand what the tests are designed to detect.

From here, it is easy to see how there can be datasets where the tests will yield different results.

Statistical tests measure differences between samples in different ways and are sensitive to different aspects of the distributional differences.

It's certainly possible for one test to reject and another test (perhaps designed for testing a somewhat different hypothesis) to fail to reject when applied to the same sample at the same significance level. (However, you seem to be misinterpreting what failure to reject implies -- it does not mean that the test shows the population distributions are the same. It only means that the differences in the sample weren't large enough to detect whatever difference there might have been.)

In the case of the Kolmogorov-Smirnov test, it's intended to pick up any kind of difference in distributions, but tends to have less power to detect differences in the tails than say Tony Pettitt's two-sample version of the Anderson-Darling (doing slightly better at differences in the middle. The Wilcoxon-Mann-Whitney by contrast is focused on picking up differences that tend to make one variable typically "larger" than another (alternatives of the form $P(X>Y)>\frac12$ which encompasses location shift alternatives among a host of other possibilities). At the same time, it can't detect a shift in scale that's not accompanied by a difference in location (e.g. a difference in variance of two normals with the same mean). Because its statistic concentrates on a more particular kind of difference in distribution, it does better at seeing when that's the kind of difference that's present.

Here's a pair of samples where the Wilcoxon-Mann-Whitney rejects and the Komogorov-Smirnov does not: 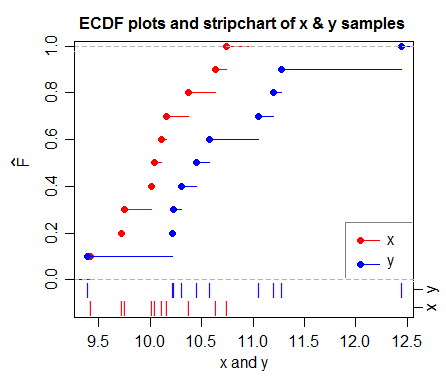 In this case I made the data by generating two random (normally distributed, as it happens but this is not important) samples and then shifted one slightly up (just enough to lead the rank sum test to reject). Since it's somewhat more sensitive to that kind of difference than the Kolmogorov-Smirnov two sample test is, there was a good chance that the Kolmogorov-Smirnov test might not pick up the difference at that significance level (and that's what happened).

Not the answer you're looking for? Browse other questions tagged r hypothesis-testing wilcoxon-mann-whitney-test kolmogorov-smirnov-test or ask your own question.

1
Is Kolmogorov-Smirnov test known to fail in some special cases?