How you would try convincing a non-technical audience that applying DCC GARCH for correlation estimation is better than Pearson's correlation?

The task becomes even more challenging since, as seen in the below image, the GARCH-based correlation follows quite closely the Pearson's correlation calculated with a rolling window. 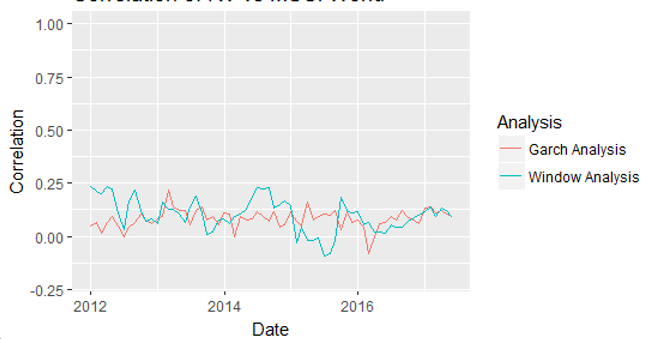 I am considering the following:

I assume that first you want to find out which of the two methods is better and only then try convincing the audience. Otherwise you might (inadvertently) be trying to deceive the audience.

In-sample fit: For example, you may know the true conditional correlations, e.g. if you have simulated the data. Then you can measure the goodness of fit (e.g. $R^2$) of the fitted correlations due to rolling-windows and DCC. Whichever yields a better fit (a higher $R^2$) is better. Then it should be easy to convince the audience by showing the fitted vs. true and the errors. Better fit and smaller errors should be a convincing argument that one method works better than another.

Out-of-sample forecasting: Another example is when you do not know the true conditional correlations. Then you can compare the forecasting performance of the two methods. You would compare the forecast errors of the rolling-window and the DCC forecasts and see which ones are smaller. Again, it should be easy to convince the audience that a method that forecasts better is a better method for forecasting.

How do your three points fit into this framework?

Obviously DCC GARCH employs far more complicated weighting scheme than a simple rolling window (e.g. all observations in DCC are taken into consideration and etc.), so the question is, do you really needs this extra complexity? If you pursue "diagnostics" of association between variables goals then probably rolling window correlation is sufficient ... if refer to the fundamental summary work (at least in the context of volatility modelling)

it all starts with a rolling window weighting scheme and gets more complicated as we move further on. Well, again to non technical audience the difference is how you assign weights to measure your dependence, rolling window is a very rough weighting scheme, only certain period equally weighted observations are taken into consideration. For example (the most simplified one I guess), observations that happened long before have no impact on your association measure while in DCC GARCH they are taken into account, though receive less attention=less weight (maybe even significantly less weight) but still influence your final association estimate. Hope it helps.

Not the answer you're looking for? Browse other questions tagged time-series correlation garch volatility-forecasting or ask your own question.